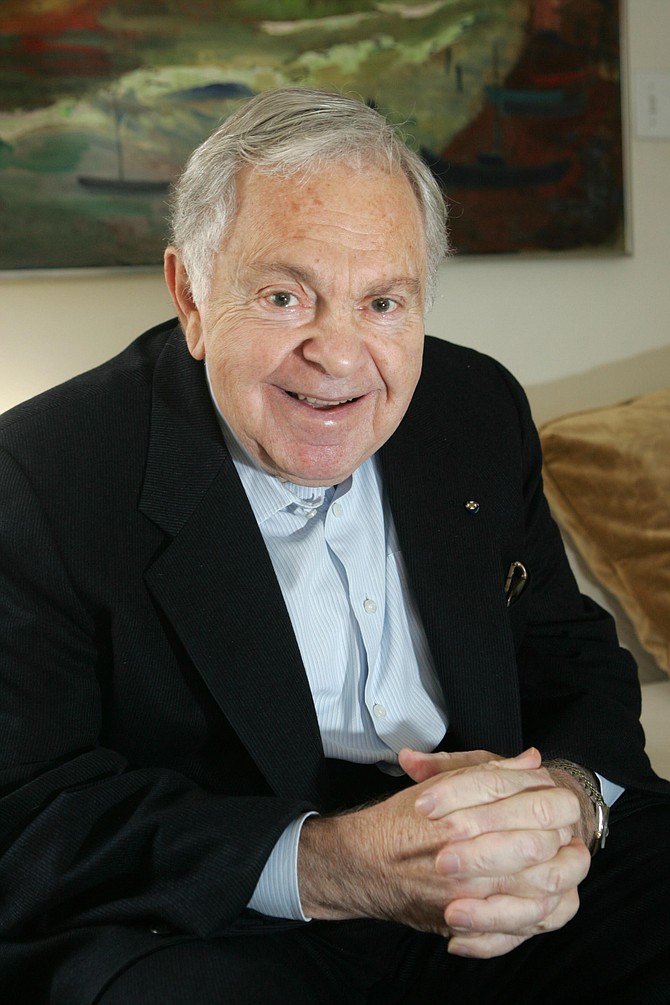 When Joe Cerrell started working in politics, the job of "consultant" didn't exist. In the last 45 years, his L.A.-based Cerrell & Associates has run hundreds of campaigns, mostly for Democratic candidates. Clients have included California Attorney General Jerry Brown; Los Angeles City Attorney Rocky Delgadillo; and Judge Lance Ito, famous for trying the O.J. Simpson criminal case. The company has run more than 380 judicial campaigns in the state. Cerrell also worked against ballot measures such as Proposition 86, the tobacco tax, and Propositions 78 and 79, prescription drug discount programs, which were all defeated. Cerrell & Associates has 38 employees and revenue of $6 million, with about one-third coming from political campaigns and two-thirds from crisis management and government relations for corporate clients. Cerrell has taught classes in political science at USC and Pepperdine University. He met with the Business Journal at his Hancock Park home to discuss his career and experiences.

Question: How did you get into politics?

Answer: I started the Democratic Club at USC. Hubert Humphrey was my first speaker. Then I got Paul Butler, chairman of the California Democratic Party. Soon I started hearing from political people about speaking engagements for Sen. Estes Kefauver, Adlai Stevenson, John Kennedy you name it.

Q: At that time, did the job title "political consultant" even exist?

A: This career did not exist.

Q: So what career were you planning to pursue?

A: Secondary school teacher in social studies. To this day, I hold a secondary teaching credential. I can go out and become a high school teacher.

Q: What changed your plans?

A: I was invited to join the campaign staff of Attorney General Edmund "Pat" Brown, who was running for governor. On Lincoln's birthday, 1958, I joined his staff.

Q: Why was that the turning point of your career?

A: Pat Brown won the election overwhelmingly, by a million votes. Then I enrolled to go back to graduate school. But this Jesse Unruh guy became the speaker of the Assembly. He said, "I will run the party through my staff guy. I'll go with Cerrell." So I was the executive director of the California Democratic Party.

Q: How old were you at the time?

A: Twenty-four. Late June 1959. It led to working on the Kennedy campaign. That's another whole story. After Pat Brown won the gubernatorial election, the politicians started looking at California for the presidential election but not the way they do it now.

Q: What's the difference, then and now?

A: Nowadays, everybody has their own political campaign. John Edwards, Hillary Clinton, Barack Obama they all have their own campaigns. Kennedy didn't have a campaign. They came to California, and I was the director of the party.

Q: How did you hook up with the Kennedy campaign

A: I remember a dinner in May 1960 where all the candidates were at the Beverly Hilton. Lyndon Johnson put a cowboy hat on me a few minutes before Kennedy arrived. Kennedy was trying to figure out why I had on a cowboy hat when he thought I was his guy. In fact, I was everybody's guy. I loved them all. And they loved me because the convention was here.

Q: When did you form your own company?

A: Incorporated in 1963, but it started functioning just after Kennedy's election, in time for the 1962 congressional elections.

Q: Were there other companies doing similar work?

A: One, for Republicans. Spencer Roberts & Associates. They were Reagan's people. But we all faced the same problem how to stay alive between elections.

Q: What was your solution?

A: Advice from Stuart Spencer. We were driving down to see some big corporate Republican in Santa Ana. I asked him about his business and he said, "You do elections in the election years and work for corporations in the other years. You get them to give you retainers."

Q: Who were your first corporate clients?

Q: What was the biggest disappointment of your career

A: Hubert Humphrey's campaign. He was one of the most sensational politicians I ever met. He came close but never got the gold ring. The country would have been better off if he won instead of Richard Nixon.

Q: What was your biggest success in California?

A: Pat Brown. Sensational man. I don't want to get into comparisons between him and his son. I ran his son's first campaign.

A: Trustee of a community college. There were 133 people running for the same office. Of the 133 candidates, he finished No. 1. The rest is history. But I almost didn't work for him because he didn't need me. And I thought he was a little way out.

A: One time in a meeting I said, "Well as Edmund G. Brown Junior " He said: "I'm not running on that name. I'm running as Jerry Brown."

A: I walked to the door. He said, "Where are you going?" I said, "If you run as Jerry Brown, you're stupid. You'll win, but I don't want to work for a stupid man." So the compromise was he ran as Edmund G. "Jerry" Brown.

A: He didn't want to owe his father.

Q: What was the hardest decision of your career?

A: To stay with Hubert Humphrey instead of going with Bobby Kennedy in the presidential campaign of 1968. I was never close to Bobby, but I had been with the Kennedys for years. But Humphrey was one of the greatest Americans ever. He had a great vision for the country.

Q: Who was your favorite client?

A: George Moscone. As a fellow Italian-American, he was the most fun. One night I was at his office where he was later assassinated and I wanted to go to dinner. He said the World Series was on, and he wanted to watch it in the office because the nearest Italian restaurant didn't have a television. I called down and talked to Lorenzo, the restaurant owner. As we pulled up to the restaurant, they were taking a TV out of the box and installing it so George Moscone could watch the game.

Q: How did the "two guys from Italy" thing work in politics

A: One time I had breakfast with a client, when George was a state senator. We agreed on a fee for me to kill a bill. I went to my room at the hotel in Sacramento, I called George to ask about the bill and he said, "Fine, it's dead." The client hadn't got back to his room and the bill was already dead.

Q: How has Italian heritage played into your career

A: I got active in the Italian-American National Foundation. They called me up and said I had been nominated to be president. I turned down the nomination and they said, "Fine, you just got elected."

Q: What were the highlights of your tenure?

A: I have met the pope on four occasions. I have been knighted by the president of Italy. I went to Milan a few years ago, the phone rang. A secretary said, "This is Prime Minister Berlusconi's office. He wants to know what you're doing tomorrow morning." I said, "I'm doing whatever Mr. Berlusconi wants me to do." The next day we went to watch Berlusconi's soccer team at his stadium.

Q: What do you think of Obama?

A: I've never met the man. I'd like to say I've shaken his hand, but I haven't. If he continues to listen to those around him, like my friend Leon Panetta, he'll do fine.

Q: What are some of the biggest mistakes politicians make?

A: Take a look at any losing campaign, that's an example of mistakes.

A: Of course. And I've cried afterwards. I go back to the Hubert Humphrey campaign.

.Q: You think it was winnable"

A: Absolutely. That's the worst part losing a campaign you could have won. Humphrey could have won. The country lost by not having Hubert Humphrey in office for at least one year, and that's not a partisan statement.

Q: Looking back, why do you think he lost?

A: Because the extreme left, the Eugene McCarthy crowd, wouldn't endorse him. I remember after my wife had a miscarriage, I brought her to Chicago for the Democratic Convention in 1968. She opened the window and got tear-gassed. I'm emotional right now thinking that the Humphrey campaign was doable.

Q: It still stings after all these years?

A: One time I walked into a restaurant in Washington, D.C., a student intern came up to me and said, "The man over at that table says hello to you." I said, "F,- him." That was Eugene McCarthy, whom Humphrey created, and when it came time for the election, he abandoned him. As far as I was concerned, I owed him nothing.

Q: What are your favorite books about politics

A: I don't read books, only newspapers.

Q: Have you been involved in dirty campaigning? What are some tactics you would never use?

A: I would like to give you the holier than thou attitude: "We would never do that." But let me just say, one of the reasons we've been around so long is that we can live with ourselves. The American Association of Political Consultants, of which I'm a founder, has a professional code of ethics. Have we ever done anything unethical? I'm sure other people think so. But I can't give you an example when I've had trouble looking at myself in the mirror.

Q: Were your Democratic leanings developed at college or earlier in life

?Q: How have elections changed over your career?

A: We have watched these neighborhood campaigns turn into humongous campaigns. Ballot initiatives in California even to run a cheap one costs $6 million or $7 million.

Q: How about the nuts and bolts of campaigns?

A: Now everything is specialized. If you're the media guy, that's all you do. In the old days, people hired Cerrell to run their campaign from soup to nuts press releases, voter turnout, writing mailers, TV commercials, everything. Now you hire a general strategist, a pollster and a media strategist. It's Lego. You put them together to form this complex structure and after a few months you take them apart.

Q: When did you realize the rules were changing?

A: Let's put it this way: For the Humphrey campaign, I hired my mother to run my office. I had to move, with all my office equipment, to Humphrey campaign headquarters on Wilshire Boulevard. But we still had those retainer clients we had to take care of, even during the election. That's when we decided we couldn't run an entire campaign anymore.

Q: What advice would you give to people who want to join your profession?

A: Specialize. There aren't too many generalists anymore.

Q: When people ask where are you from, what do you say?

A: I'm still a New Yorker by accent and attitude. The other day I was sitting in a restaurant and a guy said to me, "Did you go to P.S. 49?" He didn't know me, but he could tell from the way I talked that I went to P.S. 49 in Queens, New York.

Q: How did you do in school?

A: I went to school with Antonin Scalia. He was a straight-A student. I was a 4.0 student two points one semester, two points the next semester.

Personal: Wife Lee owns 51 percent of the firm, where his stepson also works; his daughter and her children live in the San Fernando Valley; and his son Joe Jr., a former press secretary for Al Gore and Hillary Clinton, works as spokesman for the Bill & Melinda Gates Foundation in Seattle

Hobby: "Politics." Co-founder of the Jesse Unruh Institute of Politics & Government and founder of the Trojan Democratic Club at USC