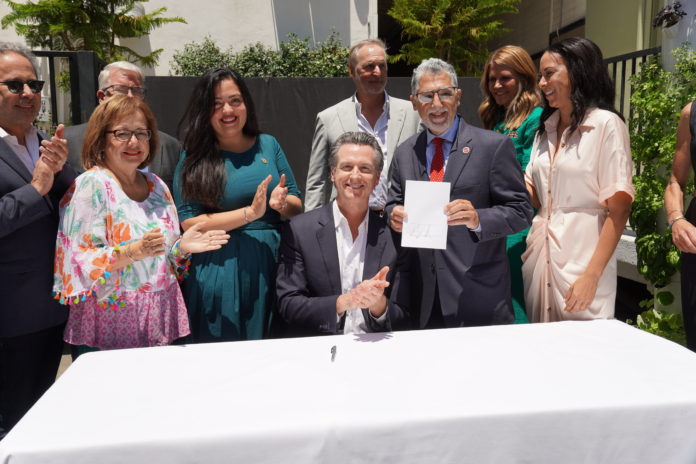 Gov. Gavin Newsom signed a bill to deliver $330 million for California’s film and TV industry, a move that also incentivizes diversity for production cast and crew.

Traveling to Sunset Gower Studios in Hollywood on July 21, Newsom used the more than 100-year old lot as a backdrop for his program to promote soundstage construction.

The new bill includes a $150 million tax credit directed at productions shooting more than 50% of their schedule at one of these facilities.

It also designates $90 million to encourage TV shows to relocate from other states, and subsidize productions that have already returned to California.

The soundstage provision includes a requirement that productions hire employees whose diversity is “broadly reflective” of California’s population. This marks the first time that California’s tax credit program has included a diversity hiring goal.

Variety published its own diversity study based on more than 51,000 names taken from entertainment union rosters. The results were unsurprising given the industry’s slow progress in diversifying its workforce, with 16.1% Latino names and 4.7% Asian American names, far below state population numbers for both groups.

The soundstage credit will award a 4% bonus to productions that meet diversity targets, 2% each for above- and below-the-line hiring goals.

The bill’s $330 million price tag effectively doubles the amount that the state has annually offered California productions since 2015. After Newsom initially proposed to increase the TV relocation incentive by $30 million, the Legislature added $150 million to compensate for shows that had already relocated.

Despite the state’s history and its pedigree as an epicenter of film and television production, California faces stiffer competition from more states and countries like the United Kingdom and Canada to retain production work and the local income that it generates. The bill seeks to provide an edge to keep Hollywood’s entertainment output home grown.