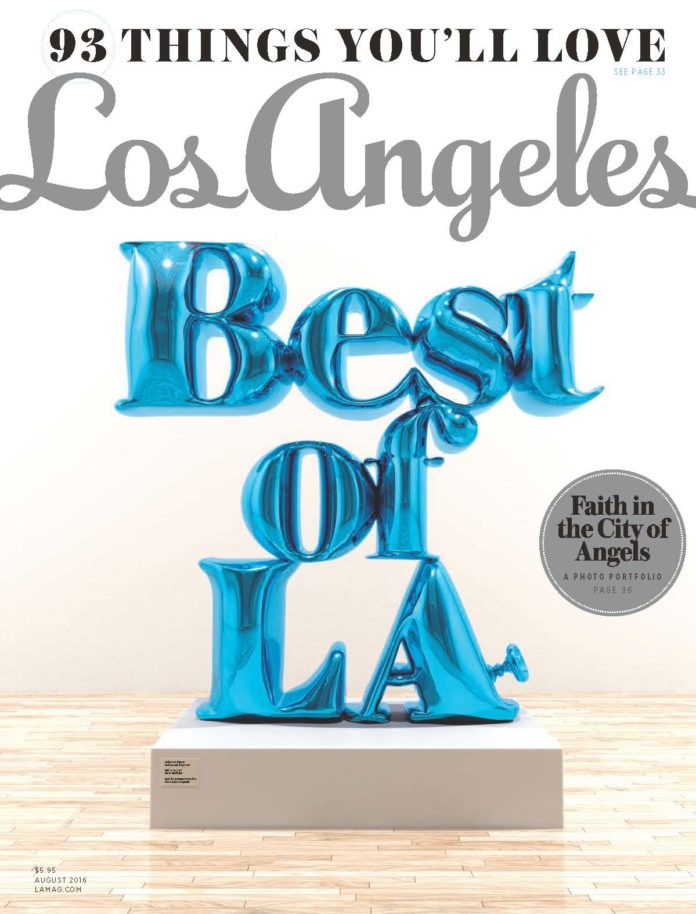 While Sports Illustrated is known for its annual swimsuit issue, and Fortune magazine has its Fortune 500 issue, Emmis Communications’ Los Angeles magazine boosts its revenue and readership each year with its annual “Best of L.A.”

It’s the strongest newsstand seller of the year, averaging 25 percent higher newsstand sales over other issues of the monthly, according to Publisher Erika Anderson.

The newest list, out on July 21, names nearly 100 of what it deems the city’s best offerings in a number of quirky categories, including best hipster barbershop and best infrared sauna.

Each selection for the “Do,” “Shop,” and “Eat” sections is vetted by approximately 30 writers and three editors. At least three options from each category of the best services, goods, or entertainment must be tested before final selections can be made.

“The categories are what drive the whole thesis of the package, which is really unique among other local publications doing a similar list,” said Marielle Wakim, arts and culture editor. “This rigorous vetting process leads to such a richer experience for the reader.”

Founded in 1961, the magazine started the annual list in 1989. Wakim said feedback from businesses and readers alike has been positive each year – especially when the winners in each category are brought together to celebrate at the Best of L.A. party after the magazine goes to print.

“People are so committed to living out all of the service packages we do,” she said. “And the businesses tell us how many people come in saying they read about them here in the magazine.”

Despite tributes to two of sports’ most revered athletes of all time – the late Muhammed Ali and retired Los Angeles Lakers guard Kobe Bryant – ratings for ABC’s annual ESPY Awards telecast couldn’t stand up to NBC’s “America’s Got Talent” on July 13.

Broadcast live from the 7,100-seat Microsoft Theater at downtown’s L.A. Live, fans could attend the star-studded ESPYs in person with a ticket priced between $115 and $550. For those who opted to watch from home, the ESPYs saw a 24 percent drop in viewers compared with last year’s record-breaking broadcast, which featured former Olympian Caitlin Jenner.

According to Nielsen figures, the 2016 show scored about 5.5 million TV viewers while “America’s Got Talent” drew more than 11 million viewers in the same time slot to win the night.

Even legends need time to rest. Pulitzer Prize-winning photojournalist Nick Ut announced he would retire from his job at the downtown office of the Associated Press next year after 51 years of service with AP. Ut’s iconic photo of 9-year-old Kim Phuc fleeing a napalm bombing during the Vietnam War became a symbol for global consciousness. He was recently honored with the 2016 Quinn Award for Lifetime Achievement by the Los Angeles Press Club. “I am going to travel a lot and do workshops and go everywhere,” Ut told News Photographer magazine last week. … Penske Media Corp.’s Deadline.com has hired Michael Cieply as executive editor. Cieply, a veteran journalist who has covered Hollywood for the Los Angeles Times, The Wall Street Journal, and The New York Times, will join Deadline on Aug. 1. … The Los Angeles Review of Books has hired two new members to its team: Boris Drayluk as executive editor and Korama Danquah as membership and fundraising manager.

Staff reporter Kristin Marguerite Doidge can be reached at kdoidge@labusinessjournal.com or (323) 549-5225, ext. 228.