Weekend Getaway Guide: Places to Stay in Los Angeles for that Weekend Escape 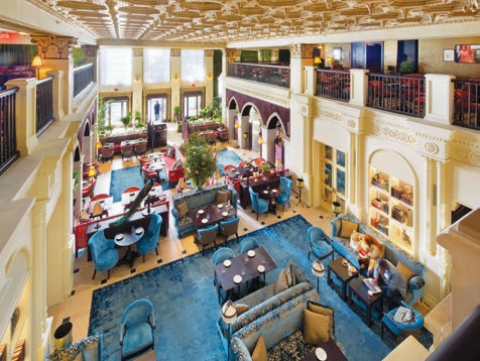 In terms of things to do, Los Angeles continues buzzing with activities for the new season. For art fans, the city is booming with new exhibits, concerts and live performances at institutions such as The Getty Center, The Ford Theatres and the Hollywood Pantages.  For sports fans, L.A. has the most sports franchises, events and venues than any other city in the world, making the City of Angels a game day haven. And if you wan to make a staycation of it, and stay somewhere you haven’t tried, here is a list of some of the latest hotel openings.

Native Hotel (Malibu) – Originally built in 1947, Native Hotel (formerly known as the Malibu Riviera) was remodeled in spring 2017 and unveiled a modern new look inspired by old paradise charm. Thirteen individually curated king-size rooms make up this mid-century modernist retreat. Surrounded by acres of lush greenery and perched on the Pacific Coast Highway, guests are just steps from some of the most idyllic beaches in the world including Zuma Beach and Point Dume. www.thenativehotel.com

Hotel Indigo Downtown Los Angeles (Downtown) – InterContinental Hotels Group debuted Hotel Indigo Downtown Los Angeles, a hip 350-room hotel in April 2017. The 18-story Hotel Indigo is the flagship hotel at Metropolis, a $1 billion mixed-use development, which will feature three residential towers, curated retail experience and a rooftop bar. The property sits at the heart of Downtown L.A., linking the Financial District to L.A. LIVE. Design for the hotel is inspired by its surrounding neighborhood and focuses on prominent narratives from Downtown’s past including Fiesta De Las Flores, the glamorous pre-Hollywood nightlife scene and the underground speakeasies of the roaring twenties. www.ihg.com/hotelindigo

InterContinental Los Angeles Downtown (Downtown) – InterContinental Los Angeles Downtown is part of the tallest U.S. building west of Chicago as the Wilshire Grand Center and opened in July 2017. The hotel features 889 rooms, 110 suites and one presidential suite, including a “sky lobby” on the 70th floor. There is nearly 100,000 sq. ft. of meetings, conventions and event space. Wilshire Grand Center is a $1.1 billion project, which is developed by Korean Air and Hanjin Group, and also includes 400,000 square feet of offices and 45,000 square feet of retail space. Wilshire Grand Center is about 80 feet taller than the U.S. Bank Tower and the hotel is the largest InterContinental in the Americas. www.ihg.com

The Surfrider Malibu (Malibu) – A modern California Beach House, inspired by the picturesque Malibu landscape and rich heritage of California surf culture. Personifying Malibu’s historic beach-town community, the complete redesign of the original 1950s-era motel has transformed The Surfrider into a contemporary boutique hotel that gives guests an unparalleled and elevated visit to Malibu. The Surfrider opened summer 2017. www.thesurfridermalibu.com

Kimpton Everly Hotel (Hollywood) – Kimpton Everly Hotel opened in August 2017 and features 216 rooms, relaxed communal spaces and effortlessly cool design. With its light-filled interiors, thoughtfully designed for comfort and ease, Kimpton Everly Hotel is a true celebration of its Beachwood Canyon neighborhood and the laidback California lifestyle. The hotel is steps away from the iconic intersection of Hollywood and Vine with unbeatable panoramic views of the nearby Hollywood Sign, Downtown Los Angeles skyline and the Pacific Coast. www.everlyhotelhollywood.com

La Peer (West Hollywood) – Opened in January 2018, La Peer Hotel features 105 guest rooms and suites, a rooftop event space, poolside fitness center and more than 8,000 square feet of indoor and outdoor dining and lounge spaces. In addition, the property’s pool – while in the center of the bustling city – is an escape in and of itself accented by lush landscaping and handcrafted lanterns hanging from above that set the tone for an urban retreat. www.lapeerhotel.com

NoMad Hotel (Downtown) – Sydell Group opened the Los Angeles outpost of New York’s NoMad Hotel in January 2018. The NoMad is redeveloped out of Downtown’s Giannini Place, which was built in 1923 as the headquarters for Bank of Italy (which became Bank of America). The 12-story hotel has about 250 rooms as well as a rooftop pool. L.A. is the first city where three Sydell Group brands are represented. www.sydellgroup.com/nomad/los-angeles

Hotel Figueroa (Downtown) – Hotel Figueroa reopened February 2018 after a complete renovation that has transformed its Moroccan décor to a new contemporary aesthetic with a touch of Spanish flare. Hotel Figueroa now offers 268 redesigned guest rooms with expanded bathrooms, 57 new suites, new culinary experiences, three alluring bars, a garden on the roof, and 10,000 square feet of event space. New windows have been installed in rooms to help block out the noise from Figueroa Street. Veranda, a relaxed al fresco dining experience will debut May 1, serving coastal Mediterranean-inspired cuisine in a lush, poolside oasis. www.hotelfigueroa.com

The Mayfair Hotel (Downtown) – Located in the Westlake district just outside of Downtown Los Angeles, The Mayfair Hotel recently reopened in July 2018 after a full redesign. The 15-story, 294-room hotel originally opened in 1926 and was known as the tallest building west of the Mississippi River at the time. The completely renovated hotel brings guests back to its glory days of the early 20th century and now features a grand lobby, mezzanine atrium, an art gallery, meeting and event spaces and the three new dining options Even American Bistro; M Bar; The Library Bar. The property’s overhaul was led by Los Angeles-based developer ICO Group of Companies, who commissioned Gulla Jónsdóttir Architecture & Design and Artist-in-Residence Kelly “RISK” Graval. www.mayfairla.com

SLS Beverly Hills (Westside) – The SLS Beverly Hills debuted in August 2018 with fresh renovations and updated technology in all 234 guest rooms and 63 suites just shy of the hotel’s 10-year anniversary. With this $20-million renovation comes two new suite categories: The Style Suite and the Storyseeker Suite which include distinct bedroom and living areas. The redesign, courtesy of Dakota Development & Avenue Interior Design and borrowing inspiration Philippe Starck, offers a fresh perspective on modern luxury while staying true to the iconic touches and elements that are inherent to the flagship SLS hotel. The property excitingly features four culinary options from culinary director and chef José Andrés: The Bazaar, Tres, Somni and Altitude. www.slsbeverlyhillshotel.com

The Hoxton, LA (Downtown) – This September, chic British brand Hoxton will debut The Hoxton, LA in a transformed 1925 building that was once the headquarters of the LA Railway Authority. Located in Downtown L.A.’s Historic Core at 11th and Broadway, the 10-story hotel features 174 guest rooms, three restaurants including one on the roof, multiple bars and a rooftop pool. www.thehoxton.com/california/downtown-la/hotels

Grupo Habita Project (Arts District) – Early next year, the first L.A. project for Grupo Habita, a group that develops hip hotels in Mexico City, Chicago, and New York will take over a 109-year-old brick warehouse in the Arts District into modern accommodations with a rooftop lounge, garden and pool.

Information for this article was provided by Discover Los Angeles. Learn more at DiscoverLosAngeles.com.