Thriving In Their 40’s: Praveen Kumar 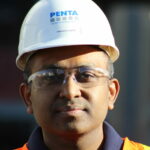 Although Praveen Kumar now participates in preconstruction management at one of Los Angeles’ leading general contractors, the early stages of his career were rooted in architecture. After earning his master’s degree in Construction Management from Purdue University, he embarked on a career journey that took him under the wing of several Southern California contractors, before landing at The PENTA Building Group, where he has served for nearly 10 years.

Kumar believes the greatest success in his career comes from his role in mentoring others. He says that if he has the opportunity to enable the budding careers of 5 or 10 people by the time he retires, he would have returned a great favor that his previous mentors granted to him when he started out in the late 90s. He looks for potential, eagerness and willingness to learn in others and does his part to counsel them.