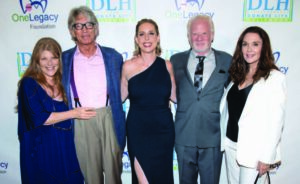 Popular television programs Chicago Med, Grey’s Anatomy and The Resident were among the productions honored at the 2022 DLH Inspire Awards, held recently in Hollywood. Presented by OneLegacy Foundation’s Donate Life Hollywood project, the Inspire Awards salute Hollywood’s most authentic and positive organ donation and transplantation storylines, sending messages of hope and inspiration that can literally be the difference between life and death for thousands.