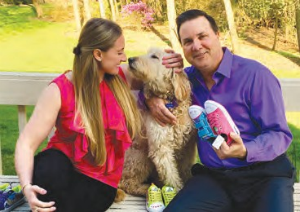 Bobbi-Toads was literally born from a dream that founder Bob Stanley had while he was on vacation with his family. In his dream, Bob was instructed to invent a new kind of kids’ shoe; one with toes that could be painted with nail polish. Bob was also told to give back to the charity “Our Lady of the Angels,” a charity he had never heard of.

Bob Stanley was a printer by trade and had never worked in retail or fashion, so at first he ignored the dream. Upon return to his print shop he started working on an order from a new customer, which happened to be the charity from his dream.

All these signs led Bob to turn his dream into reality. He sketched out the designs he had visualized and filed for a patent.

Since that time, Bobbi-Toads has grown with operations in Chicago and Los Angeles. The products are manufactured internationally and designed locally in Los Angeles by Bob’s daughter and co-founder Jacquelynn Stanley.

In keeping with the company’s mission of giving back, Bobbi-Toads donates 30% of its profits to charitable organizations. Bobbi-Toads is actively involved in philanthropic efforts across the country including Our Lady of the Angels, the Ann & Robert H. Lurie Children’s Hospital of Chicago and the Nicklaus Children’s Hospital in Miami.

Bobbi-Toads donated thousands of shoes to families in need following the hurricanes in 2017 in Miami, Texas and Puerto Rico. The sneakers were donated in partnership with the National Museum of Puerto Rican Arts & Culture and composer Lin-Manuel Miranda.