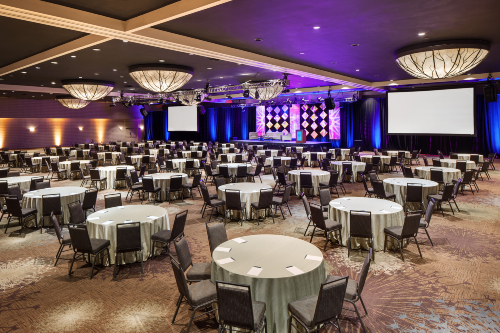 Set in the heart of downtown, The Westin Bonaventure Hotel & Suites, Los Angeles radiates an elegance that has attracted U.S. Presidents, dignitaries and stars of television and film.

With 166,553 square feet of elevated indoor and outdoor venues including the largest ballroom in Los Angeles, event planners can organize anything from lavish weddings to board meetings. Work with the hotel’s expert planners to design your LA event, from venue selection to custom catering. The hotel is minutes from the Los Angeles Convention Center where you can explore exciting shows and exhibitions. Also nearby are Griffith Park, the Los Angeles Zoo, California Science Center, Broad Museum, Ahmanson Theater, Music Center, USC, Staples Center, Grammy Museum and Dodger Stadium. Catch a concert at the Microsoft Theater or enjoy the nightlife at nearby LA Live. There is also easy access to all freeways and the METRO system, which will take you to Pasadena, Hollywood, Universal Studios, Santa Monica and Long Beach.