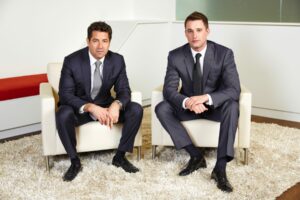 Jay Luchs may be widely known as a leading commercial real estate broker, but what many may not be aware of is that he is also fast becoming just as prominent in luxury residential real estate. Luchs partnered with Steven Schaefer and co-founded Newmark Residential. Both born and raised in Maryland, Luchs and Schaefer set a simple mission in place: to serve Luchs’ existing client base and provide unmatched strategic planning and negotiation services for residential sale and lease transactions. In just this year alone, the duo was involved in several notable sales including: the sale of Justin Bieber’s home in Beverly Hills for $8 million, NFL legend Tony Gonzalez’s Beverly Hills mansion for $21.5 million, Will Arnett’s Beverly Hills contemporary for $8 million as well as Jared Pobre and Stacy Keibler’s modern masterpiece in Trousdale for $15.2 million.