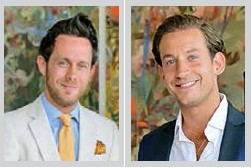 Originally from London, England, David Parnes and James Harris have established themselves as two of the top agents serving the Los Angeles luxury market. Today, the team stars on Million Dollar Listing Los Angeles and specializes in high-end residential real estate and investment properties in Beverly Hills, Bel Air, Brentwood, the Hollywood Hills, Malibu, the Pacific Palisades and the greater Los Angeles region. The partners’ “no-nonsense” approach to closing deals, coupled with their extensive network of high-net-worth international and domestic clients, have enabled them to reach a steady incline in sales year over year, with over $2 billion in sales since 2017. These staggering sales figures earned the partners The Agency’s MVP Award in 2017, 2018 and 2019 and The Agency’s Chairman Award in 2020. The partners have broken numerous records. They represented the seller in the $120 million dollar sale of 594 S. Mapleton in Holmby Hills.