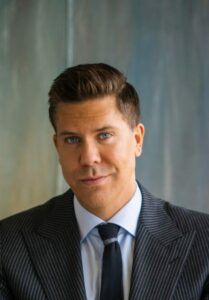 With record-breaking sales and socks as colorful as his personality, Fredrik Eklund has become an icon in real estate and on Bravo’s “Million Dollar Listing” series, appearing in both the New York and Los Angeles versions. As the co-founder of The Eklund|Gomes Team with John Gomes, the duo has secured over $15 billion in closed sales over the last decade and have become a staple of New York, California, Texas and Florida real estate. Eklund moved to Los Angeles in 2019 to spearhead the team’s expansion into California, has surpassed over $550 million  in sales volume within the last 12 months in California alone. Some notable residential sales include Sky Lane (asking $29.995 million), Strand Beach Drive (asking $27.5 million) and E Crest Rd (asking $17.99 million), just to name a few.