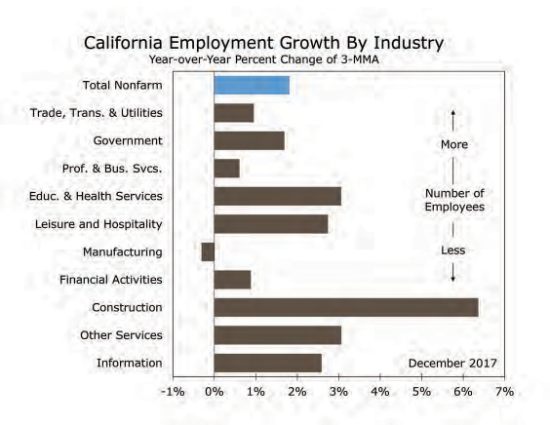 California’s economy ended 2017 on a bit of a roll, with Southern California leading the way.

Los Angeles added 28,600 jobs, while Orange County added 23,700 jobs. San Diego did not see the surge in hiring that greater Los Angeles did, adding just 7,600 jobs over the four-month stretch. That gain, however, is consistent with growth over the past year. Ventura Country posted a slight drop in employment over the past four months, although hiring remains up solidly year-to-year.

Statewide, nonfarm employment increased by 52,700 jobs in December, and revised figures now put November’s gain at 53,700 jobs. The prior two months were not too shabby either, with 45,400 jobs added in October and 50,300 jobs in September.

The 202,100 jobs added in California over the past four months mark the strongest run of job growth for California since a consistent series of seasonally adjusted data were put together back in 1990.

The Golden State’s jobless rate still remains slightly above the national rate, however; something that has been in place ever since the Cold War ended, and the state’s large defense industry began to downsize.

The late year 2017 surge in hiring was broad-based.

“Most California industries added jobs during the last four months of the year,” said Sweeney, who is based in downtown L.A. “Employment was up across nearly all of the state’s major metropolitan areas, too. The leisure and hospitality industry is a notable standout, adding more than 47,000 jobs.”

Other notable gainers include transportation and warehousing, construction, and the information sector, all of which added jobs in significantly larger proportion relative to their employment base.

Despite the rash of natural disasters that hit the state over the past few months, California’s labor market has continued to put up stellar numbers. The state has seen its strongest run of job growth over the past four months going back at least to 1990, and the unemployment rate has fallen to a modern era low.

The impact from devastating fires and mudslides that impacted Southern California are not reflected in the most recent employment data. While these disasters caused significant physical and financial damage they did not alter the economic landscape for Southern California. The greater Los Angeles area is home to a diverse mix of rapidly growing industries, ranging from green energy and digital entertainment to life sciences and ecommerce. Overall employment growth is moderating, however, as the tightening labor market is making it more difficult to fill some open positions.

The growth in new industry is helping fuel a construction boom. The movement of residents and businesses back into downtown Los Angeles has help set off and apartment boom that is finally beginning to show some signs of moderating. Office and industrial development also remains robust but continues to grow in line with demand.

While Southern California has accounted for the bulk of the most recent increase, hiring has also remained strong in the San Francisco Bay area. Employers in the San Jose-Sunnyvale- Santa Clara area added 17,300 jobs over the past four months. The burst of hiring has largely put to rest fears raised earlier this year, when hiring appeared to sputter. Preliminary data show hiring in the San Jose area rising 1.7 percent in 2017, which is off considerably from the 3.1 percent gain posted in 2016.

The moderation was mostly in construction, retail trade, and administrative services. Job growth in the technology sector was roughly in line with the prior year. The San Francisco metropolitan division also saw a notable slowdown in nonfarm employment growth. Employers added 22,400 net new jobs over the past year, compared with the 43,800 jobs added in 2016.

The Oakland area also saw hiring moderate in 2017, even though hiring picked up considerably during the second half of the year. Employers added 20,800 new jobs in the Oakland- Hayward-Berkeley metropolitan division, down from 35,900 the prior year.

Hiring appears to have moderated across most industries yet has slowed the most in many lower-paying industries, including retailing, administrative services and the leisure and hospitality sector. California’s Population Rose by 240,200 Residents in 2017. One of the reasons job growth moderated across California is that the Golden State is not attracting job seekers in the numbers that it did earlier in the cycle. Population growth has lost momentum over the past two years and the Golden State added just 240,200 new residents in 2017, or a scant 0.6 percent increase.

California received less of a boost from natural increase, or births minus deaths, as the state’s population continues to age. This happened in most U.S. states. There was also a drop in immigration from overseas, which occurred in every state yet is more impactful in California. Net domestic migration worsened, as more residents moved away from California than moved to it. The deterioration in net migration is being driven by the rising cost of living, which is disproportionately affecting mid-skilled workers.

California’s attractiveness to job seekers has also likely diminished, as opportunities for tech and entertainment are growing rapidly in other parts of the country, including Austin and Atlanta. Slower population growth will make it even more challenging for California employers to find the skilled workers they need, which is one reason large tech employers are increasingly looking for ways to expand in other parts of the country.

“We’ve seen robust growth in most industry segments over the last year,” said Sweeney. Capital expenditures and M&A both have a positive outlook in Los Angeles in the year ahead,” says Sweeney. “We’re cautiously optimistic.”

Mark Vitner is a managing director and senior economist at Wells Fargo, responsible for tracking U.S. and regional economic trends.