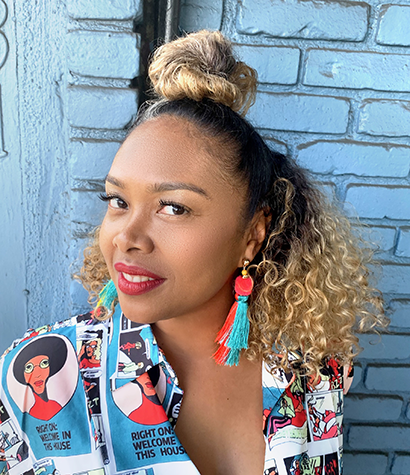 Made in South LA – Technology Academy

Cassie Betts is a leading advocate for increasing diversity in tech through youth & community training. She was homeless at the age of 19. Through several resources and local organizations, she was able to go from sleeping on bus stop benches and cardboard boxes to acting and modeling in Coca-Cola® commercials as well as TV & film. She graduated from FIDM, the Fashion Institute of Design and Merchandising and maintained a lucrative career in the fashion industry. Cassie founded a fashion-tech company called District2.co in 2013 out of the South LA Incubator, Vermont Slauson Economic Development Corporation (VSEDC), as well as Silicon Beach’s Stubbs Alderton & Markiles Preccelerator. She is also a founding member of Black Women in Tech, co-produces Urban Tech Connect – an annual tech conference headed by Plugin South LA, and is the Lead Consultant for Technology & Innovation at VSEDC. Forbes dubbed her “The Woman Turning South LA into Startup Land”. She is the catalyst and visionary behind South Central’s first tech center and leading the charge for the South LA Best Buy Teen Tech Center opening Fall/Winter 2020 with VSEDC in partnership with Annenberg Tech, and PledgeLA. Last but most certainly not least, Cassie is the Founder of MISLA, Made In South LA, a non-profit training at-risk/ high-risk South LA youth in high-level technology and multi-media. Local Community organizations and small businesses contract out MISLA youth on an on-going basis to take over their web/ app development as well as Branding & Digital Marketing.