Surf Air Secures $200 Million in Funding Ahead of IPO 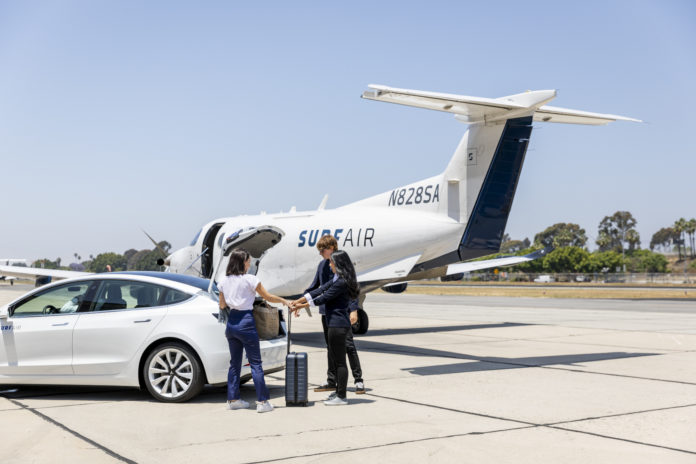 Hawthorne-based Surf Air Mobility Corp., the subscription private air service that initially specialized in flying execs between Silicon Beach and Silicon Valley, has secured a $200 million investment that is contingent upon the company going public.

The announcement said $50 million of that commitment would be available on the first day Surf Air trades as a public company. The remaining $150 million could be drawn upon over a subsequent three-year period.

Separately, Surf Air Chief Executive Sudhin Shahani confirmed in an interview this month that the company is considering going public in the near future, either through an initial public offering or through a deal with a special purpose acquisition company, or SPAC.

“We are looking to be able to scale up quickly our fleet of small planes and also buy
hybrid-electric planes that are cheaper to operate in the long run,” Shahani said. “All this requires upfront investment, which is why we are pursuing the public company course.”

The effort to go public is coming at a time of extreme turbulence for both Surf Air and the private aviation industry.

Business travel, which had been the staple for Surf Air since its founding in 2011, cratered in the spring as the Covid-19 pandemic hit.

Shahani said the company’s business travel revenue fell 30% in just a few weeks. While that’s less than the 90% drop in commercial aviation passengers during the same period, it was still a sizeable hit to the bottom line.

But over the summer, Surf Air executives saw an opening to make up some of that lost revenue: high-end leisure travel. “A growing segment for us is the short, local getaway,” Shahani said. “In California, that means staying primarily in state, going from Southern California to Northern California or vice versa in what we call short hops between small airports.”

Unlike commercial airlines, Surf Air charges customers a monthly membership fee. The base membership of $199 allows customers access to book flights on Surf Air planes for additional airfares of as low as $99.

The next subscription level, $999 per month, allows customers to book a limited selection of flights at no additional charge.

This month, Surf Air is trying a new venture in the leisure travel market: partnering with San Francisco-based luxury camping company AutoCamp for a weekend getaway trip to Yosemite.

Surf Air supplies the $1,000-per-person flights to Mariposa-Yosemite Airport, and Auto-Camp supplies the Airstream camper rentals. The weekend was scheduled for Sept. 13-14. As of Sept. 1, Shahani said, all of the planes and campers were fully booked.

He said that between 20% and 25% of the company’s revenue currently comes from these types of leisure flights. But that also means that at least 75% of its revenue stream still comes from business travelers.

That market has recovered somewhat since the full Covid-related closures of April and March, Shahani said. “We still offer business travelers an advantage in this Covid-19 era, as people are now focused on the idea of staying out of large commercial airports and off of large commercial planes,” he said.

Ed Story, a management consultant and pilot who sits on the boards of the California Pilots Association and the Santa Monica Airport Association, said the business travel private aviation market will likely take at least two years to get back to prepandemic levels.

“There will be a rebound as developments to quash Covid-19 occur,” Story said. He called Surf Air’s pivot toward the leisure market “an interesting and creative experiment.”

It is in this uncertain environment for private/charter aviation that Surf Air is taking steps to go public. Shahani said the move is part of a transformation of Surf Air aimed at “bringing private aviation to the masses.”

The initial step in this intended transformation occurred in February when Surf Air bought San Francisco-based private aviation marketplace Blackbird Aviation.
The aim of that purchase was to expand the roster of flight offerings for Surf Air customers, according to Shahani.

But a larger roster of flights requires more planes, which means more upfront investment. That was one reason for embarking on the public company course, Shahani said.

There’s another reason to take that path: the anticipated electrification of the short-flight general aviation fleet.

Already, companies such as Hawthorne-based Ampaire Inc. are developing hybrid gas-electric small planes, touting them as cheaper to operate in the long run because they don’t require as much aviation fuel.

Shahani said he expects that, over the next several years, these hybrid-electric and then full-electric planes will enter general aviation fleets, primarily for flights under 400 miles. Longer flights than that require significant battery storage capacity on board aircraft — a daunting task because of weight limitations.

These hybrid-electric and fully electric aircraft will likely cost more to purchase upfront, which is why Shahani said the company will need the additional funds that going public will generate.

The deal with Global Emerging Markets is intended in part to reassure potential investors in a public offering.