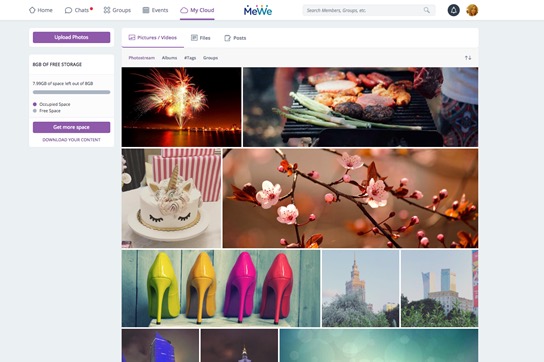 Sgrouples Inc.’s MeWe, a Culver City social network startup that calls itself an alternative to Facebook Inc., announced July 5 it had raised $5.2 million in Series A fundraising.

The latest round, as well as MeWe’s total $10 million in fundraising, was predominantly backed by celebrity investors, such as author Marci Shimoff, Rachel Roy, and Lynda Weinman, founder of Lynda.com, which sold to Linkedin in 2015 for $1.5 billion. Jack Canfield, creator of the “Chicken Soup for the Soul” book series, also invested in MeWe.

“We want real people to be involved. It gives us a high-integrity compass, it allows real people to do good and be rewarded for their investment in MeWe,” said Mark Weinstein, MeWe founder and chief executive. “It’s part of our strategy, because MeWe is a social platform for real people, so we wanted high net worth, accredited investors to benefit from and give us an ethical compass,” Weinstein added.

MeWe promotes its service as the opposite of big social media companies like Facebook, which is still addressing privacy issues after the Cambridge Analytica scandal which affected roughly 87 million users’ data. MeWe describes itself as a company that prioritizes individuals and privacy over advertising revenue. The basic service is free, but the company also offers a paid service, MeWePRO, with an annual fee of aproximately $72. The pro network gives users more features than the standard service, such as disappearing content; live voice and video chat; voice messaging; double-ratchet encrypted chat; and custom group profiles.

The company is growing on an average of 25 percent more users per month, according to a recent press release. “It is clear that the world wants a better social network that treats its member as customers to serve, not data to sell,” Weinstein said. “It’s a myth that you have to steal people’s data to have a social network… capitalism works great by taking care of your customer.”

MeWe allows users to have “total control” over what they share, along with their content and data. Additionally, MeWe claims their timeline feature does not aggregate content based on what it assumes the user will think is most popular (as most social networks, including Facebook do), but in chronological order. Weinstein reports that the site has roughly 90,000 active groups to date, 60,000 of which are public.

MeWe’s privacy “bill of rights” listed on their website highlights data and content ownership as its key tenants, as well as customers’ ability to leave the network with a of all of their data at any time.