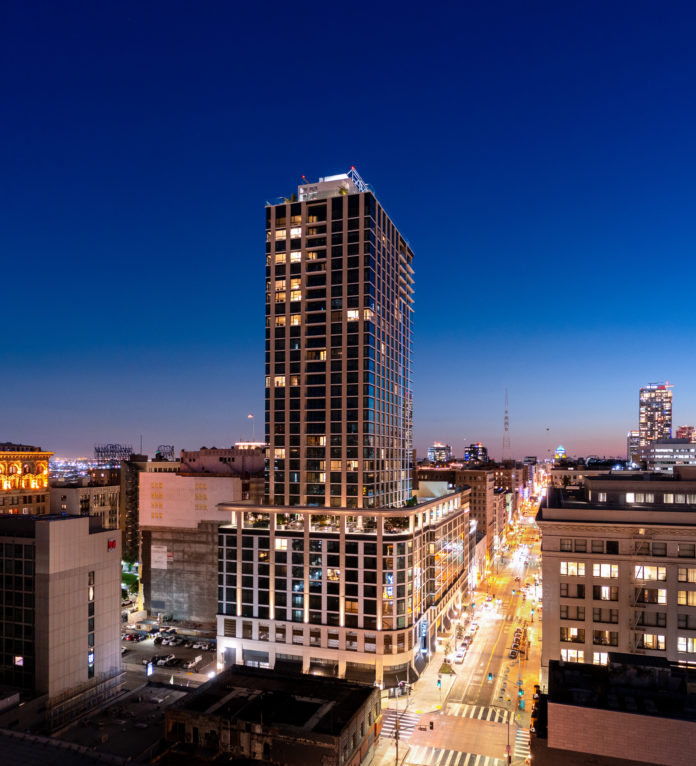 A building that some call the only true high-rise built on downtown’s iconic Broadway in the last century has started welcoming tenants.

Downtown market experts say Perla may be the final high-rise tower to be allowed on the street because of limitations in both the area’s Historic Core and on Broadway.

Those restrictions include small lot sizes, historic preservation regulations and a ban on new driveway entrances on Broadway.

Perla project director Hamid Behdad, who served as director of L.A.’s Department of Building and Safety until 2007, joined the project in 2013. That’s when the previous developer approached him about helping to entitle the land as a high-rise project, using Behdad’s knowledge of city ordinances.

“The reason this project is very unique is a little bit technical,” Behdad said, adding that the Broadway Theater & Entertainment District Ordinance, which went into effect in 2009, changed land use regulations on Broadway between 2nd Street and Olympic Boulevard, making Perla possible.

“It was intended to allow people to build on these parking lots on this corridor and build with less restrictions and more flexibility. They removed some of the regulations that previously negatively impacted Broadway, such as height restrictions,” Behdad said.

Still, regulations remain in place to maintain the historic integrity of existing buildings, and those rules present limitations.

One of the biggest issues, he said, is that developers are not allowed to build driveways on Broadway. Perla, however, is on a corner lot and has two driveways, one on 4th Street and one from a back alley.

“There’s a lot of technicalities to why I think we will never see a project like this again in the Historic Core,” Behdad said.