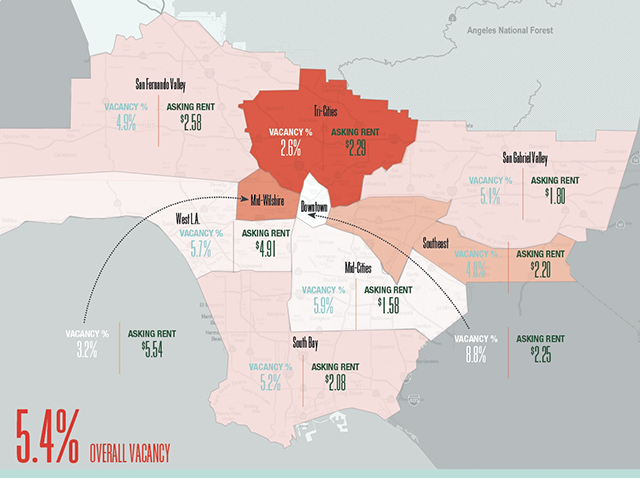 he retail landscape is shifting as more consumers turn to online shopping.

Brick-and-mortar vacancy rates are rising, driven by big-box store closings. But in many markets, including L.A., there’s an upward trend in specialty retail development, outlet malls and mixed-use projects.

Big-box closures caused roughly 323,000 square feet of retail space to open up during the first quarter, according to a report from CBRE. Vacancies rose 30 basis points quarter over quarter and 40 points year over year.

Gabe Kadosh, a vice president at Colliers International Group Inc., said many stores have been downsizing, sometimes shedding more than half their square footage.

Kadosh added that some of the first-quarter vacancies could be attributable to the closure of seasonal stores. “There were a lot of pop-up stores and holiday shopping stores that opened” late last year, he said. “Those have now closed down.”

With more space available, prices have gone down. Average asking rates for the quarter dropped to $2.40 per square foot, according to CBRE.

Despite the rising vacancies, developers are adding new retail spaces. According to CBRE, in the first quarter there were 494,000 square feet of retail under development that is slated to be complete by the end of 2019.

Most new space is designed as either outlet shopping or ground-floor retail inside mixed-use projects.

Kadosh said with so much retail in development as part of mixed-use projects in dense urban areas, those markets could see higher vacancy rates as those properties come online.

But Shauna Mattis, senior vice president at Jones Lang LaSalle Inc., said the retail component of these projects is important. “Having that shopping and dining experience closer to home is relevant,” she said.

Macerich Co., based in Santa Monica, and Simon Property Group Inc. announced in September that they’d created a joint venture to develop the Los Angeles Premium Outlets in Carson. It’s slated to open in fall of 2021 with 400,000 square feet. The complex plans to add an additional 166,000 square feet in the future.