Developer Nadine Watt Shares How Watt Cos. Is Branching Out 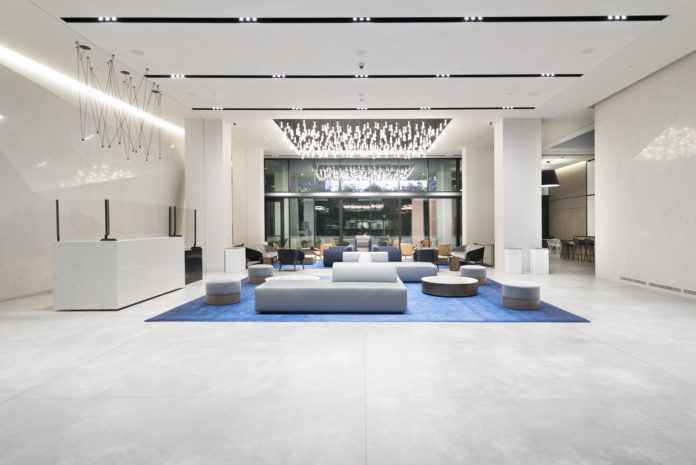 Santa Monica-based Watt Cos. has long been a major player in the L.A. real estate scene. Among its most well-known assets are the 23-story, roughly 900,000-square-foot Watt Plaza office building in Century City; the nearly 104,000-square-foot Baldwin Hills Shopping Center; the 139,000-square-foot Crenshaw Plaza; and the 232,000-square-foot Northridge Business Park.

Today, the company has a total of 50 properties totaling 6 million square feet, roughly 3.5 million of which is in L.A. County. Multifamily makes up 38% of the company’s current holdings, 32% is retail, 24% is office space and 6% is industrial.

After serving as president of the company for more than 10 years, Nadine Watt took the company helm as chief executive in Jan. 2020 just weeks before the pandemic began. Now two years into her current role, she spoke with the Business Journal about her family’s legacy in real estate — her grandfather Ray Watt founded the previous iteration of the company in 1947 — doing more multifamily projects and the ways in which Covid has impacted real estate.

I originally was not so interested in real estate. I had gone to Georgetown University, the School of Foreign Service, and I thought I wanted to get into politics or the foreign service or maybe be an ambassador someday and I spoke four languages. But they did not offer the foreign service exam that year, so I decided to go to graduate school, and I had a love for film and television and directing and producing. I ended up at USC film school and was able to use my languages to get a job in the entertainment business doing foreign sales and going to all the film markets abroad.

The company that I was working for ended up changing course and being bought out by a Canadian company, and while I was looking for another job, my father said to me, “Why don’t you come back to the real estate family business?” … I committed to being a project manager on a project for two years and now I’m 21 years in.

How have things changed since you became chief executive?

I took the helm and became CEO two, three months before Covid started. It was very interesting timing for me, and we had to go into crisis mode almost immediately. A lot of our tenants were scared, and our projects weren’t going forward, and people weren’t paying rent … and trying to navigate the PPE loan and trying to get some government reimbursement and to get our tenants to apply for those, to get our tenants to apply for any subsidies they could with the city and with the state to see if that would get people back on track.

You rapidly had to move to a remote work model. Will people be back in the office in the future?

We’re just doing a little bit of hiring right now, and everyone wants to be remote. They are all asking, “Can I be five days remote? Is this job possible (remote)?” After the Great Resignation, the things you have to do to recruit talent and keep talent, you have to be extremely flexible, and you have to be willing to make a lot of changes in order to recruit and retain the best talent.

I’m a big believer in people being together to create culture and to grow a great company, and so what I’m finding is I’m going to have to do some kind of hybrid (schedule).

How has Covid affected the company’s development and acquisition plans?

What’s been challenging about Covid is, what is a comp in the market? What are things being sold for? Office, for instance, has certainly been a challenge during Covid. What happens with office remains to be seen. We did manage to sell a couple of office projects. To just find comps and decide what was (the) market (value) has been a challenge certainly during Covid.

In recent years, you’ve focused more on multifamily instead of office and retail properties. Why?

We had started making that transition when I became president of the company. We moved away from property management, and over that time, we’re concentrating more on asset management. I saw a lot of changes in the retail landscape and thought that everyone is always going to need a place to live, so to concentrate more on multifamily, I thought, would be more profitable and beneficial.

Are you doing any workforce or low-income housing?

One of my favorite projects is our project at Exposition and Crenshaw, which is a transit-oriented development project. It’s a joint venture with Metro and the county and our community partner, West Angeles Community Development Corp., which is a wing of the (West Angeles Church) there. It’s 400 units that we have worked out to be fully affordable. …We have about 40,000 square feet of retail we’re putting in there, and we’re trying to put community-based retail in there and a grocery store that will serve that community.

How do you fund or make affordable projects pencil out?

How much of a focus do you put in L.A. versus other regions?

I’m really trying to do ground-up development outside of Los Angeles these days given the bureaucracies and the red tape. It’s very cumbersome and costly to build here. The homeless issue is definitely a deterrent to development in Southern California. We are looking to develop in other geographies and that’s also a direction that I have moved us in since I became CEO.

We’re interested in Salt Lake City, Las Vegas, Phoenix, and we’re doing some ground-up apartments in Miami and also some self-storage in Miami.

How do you evaluate markets?

In all these markets, we have a partner who’s on the ground, someone with local knowledge who has had a great track record previously who we can joint-venture with and offer our expertise and our back-of-house. They can be the expert on the ground and be the project manager and oversee it on a day-to-day basis. You have to have a good local partner.

What does the future look like for the company?