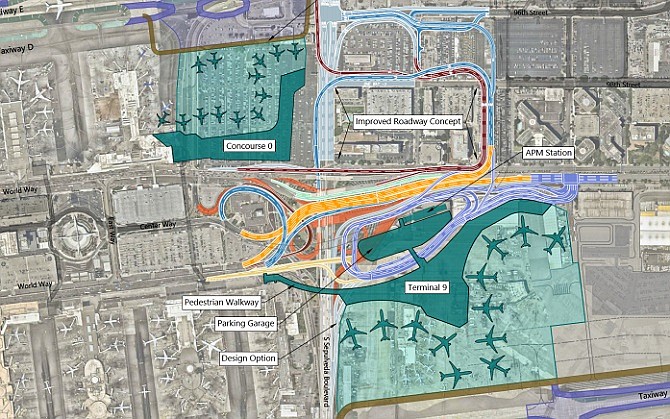 Detail of the proposed new terminals at LAX

The Los Angeles Board of Airport Commissioners voted Oct. 7 to recommend approval of the $6 billion Airfield Terminal Modernization Project, which includes adding a terminal extension and an entirely new terminal at Los Angeles International Airport. The Los Angeles City Council still needs to approve the plan.

The plan, which is separate from an ongoing $14 billion modernization project at LAX, is designed to add at least 21 boarding gates to LAX. The gates would eliminate the need for remote gates on the airfield tarmac, from which disembarking passengers are currently bused to existing terminals.

One of the new terminal facility additions would be a 745,000-square-foot, nine-gate eastward extension of Terminal 1, which is currently occupied by Dallas-based Southwest Airlines Co. The extension has been dubbed Terminal 0.

The other addition involves the construction of a new terminal, dubbed Terminal 9. This planned 1.2-million-square-foot facility would initially add 12 new gates, with the option to increase to 18 gates later on. It would be built east of Sepulveda Boulevard, the first terminal outside the airport’s central horseshoe.

Also included in the plan are numerous roadway and airfield improvements, all designed to reduce congestion on nearby streets.

The plan will now go to the Los Angeles City Council for final approval. The Council is expected to take up the plan in the next several weeks.

But the city of El Segundo, which borders the airport on the south side, and Rep. Maxine Waters, D-Hawthorne, whose district includes several communities near LAX, are opposed outright to the addition of any gates at LAX. They say new gates would bring more air traffic and more congestion to nearby streets, with additional noise and pollution affecting nearby communities as well.

One of these measures calls for a free or highly subsidized shuttle service for employees and contract workers at LAX. Bonin said this service could reduce cars on the roads around LAX, which in turn would mean less congestion and pollution.