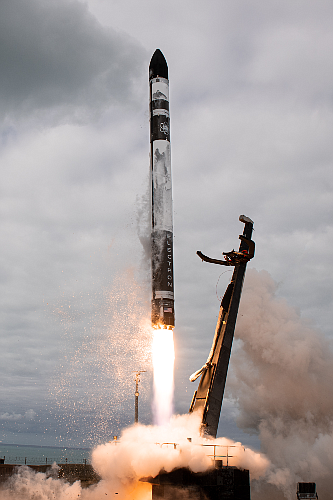 Peter Beck realized space flight was his dream while looking at the night sky as a toddler with his dad.
His fascination with the cosmos remained decades later, leading him to create Rocket Lab USA Inc.

“That was kind of my earliest childhood memory, and one that really solidified that space was something I wanted to do,” Beck said.

Though the company was founded in 2006, it picked up steam following its first orbital launch in 2018, deploying more than 100 satellites across 18 successful missions using the company’s Electron rocket and raking in millions in contracts from customers including NASA, Space Force and Seattle-based satellite company Blacksky Global.

The company has found recent success in the public markets following its August debut on the Nasdaq through a merger with Vector Acquisition Corp., a special purpose acquisition company backed by technology investor Vector Capital.

The deal valued the combined company at $4.1 billion with Rocket Lab raking in $750 million from the completed merger.

In an interview with the Business Journal, Beck who was in New Zealand preparing for the company’s next launch, discussed his path to creating Rocket Lab, his decision to take the com-pany public and his goal to tackle multiple facets of the space industry.

Share a little bit about your background and your inspiration to start Rocket Lab.
My original plan actually was to go work for NASA or one of the aerospace companies. Every-thing I was kind of working toward in my career was to do that. But down in New Zealand, there was no space industry. There was no university offering any courses or anything like that. So, my path has been a little bit unconventional, in the fact that I left school and went into a trade — tool and die making — because it would provide me the hand skills to build rockets. If you can learn about rockets at university, then you need to be building them. That’s the only way you can learn.

It wasn’t until I came to the States on a bit of a rocket pilgrimage that I decided I was going to start a company to do the things I thought were fundamentally important to do because I didn’t feel like they were being done well.

Why did you choose Long Beach as Rocket Lab’s headquarters?
We started off in Huntington Beach for our headquarters, but we moved to Long Beach for a couple of reasons. The facilities around Long Beach were superior, and the access to talent is an important element. At any given point, we’ll have 100 or more positions open, so moving to Long Beach gave us access to larger pools of talent.

How big is your workforce and how big do you want it to be?
We’re growing at a very high rate; it’s somewhere around 600. But I think any company that measures its success by the number of employees they have has a flawed metric. My answer to that would be that I want the least number of employees possible to achieve the things that we need to achieve because to me, it’s all about efficiency.

What kinds of contracts does Rocket Lab tend to generally bid on?
Generally, we like to maintain a 50-50 relationship between government and commercial on the launch side. In our Space Systems Division, it’s kind of a similar scenario; they’re sort of 50-50. Of the 50% that are government, it’s typically 30% defense and 20% civil.

With respect to what kind of contracts we go after, we made a conscious decision that we weren’t going to chase the bottom-of-the-barrel contracts for who can build the lowest-end thing. What Rocket Lab is really good at is taking on massively complex problems. If you look at our missions, they’re typically very complex. And that’s the way we like them.

Rocket Lab has gained several major contracts lately. What has spurred that growth?
In this industry, it’s all about heritage. When you have a strong flight heritage and you have a strong execution heritage, you earn your ability to be able to take on those larger missions. We’ve reached a level of maturity and operational cadence so that we’re seen as the go-to op-erator for small launches.

We’ve won a lot of multilaunch contracts from long-standing relationships with customers where quite often, we would have flown a one-off prototype, and later they come back to us because they’ve had a good experience. We’re definitely leading the market here. If you want a reliable and cost-effective launch, then we’re kind of the obvious choice.

What was behind Rocket Lab’s decision to go public via a SPAC and how has that affected the company?
Our plan was always to go public for three reasons: one was having a public currency. Mergers and acquisitions are a strong part of our thesis of growing the company, and having a public currency enables you to have those mergers and acquisitions much, much easier.

Secondly, we’re trying to build a multigenerational business. A lot of the challenges with some space companies is that they’re very centralized around one particular individual. When that one individual hangs up the cap, then what becomes of the company? We’re doing such great things that I wanted to make sure that the company would certainly out-survive me but also be a large, multigenerational company.

And then finally, access to capital. We’ve never really had any trouble raising private capital, but certainly in the public markets, the amount of capital that you can lay hands on is signifi-cant, so that’s always a bonus as well.

Year over year, your company’s profit margin went from negative 67% to positive 13%. How did you achieve that, and how do you aim to continue profitability?
There was huge growth in the company. We grew over a couple hundred percent in revenue, so that’s just what the company is experiencing. And we’re really just getting started here. I mean, we’ve got a whole new toolbox available to us to do some big things, with new products coming online and new acquisitions and all sorts of cool stuff. So, growth will be very strong if we continue here, which is one of the fundamental reasons we went public in the first place.

What are your short- and long-term goals for Rocket Lab?
So, in the short to medium term, it’s all about continuing to grow in the Space Systems Group, and in the medium to long term is our large launch vehicle called Neutron, which is a pretty significant program.

From a long-term perspective, what we’re trying to build here is a company that has its own launch, has its own ability to build whatever spacecraft or satellite it wants and to ultimately go after space applications. When I say space applications, I mean the services that we’ll use from space down here on Earth. We want to put constellations of our own satellites up there and provide our own services down to Earth.

What would you say differentiates Rocket Lab from other aerospace companies?
We have 105 satellites in orbit, so that’s always a good start. I would say our proven track rec-ord of execution and our ability to do things in a very short time frame while being very capital-efficient differentiates us.
We are a launch company, but we also are a satellite company. Having both of those things under one roof is very unique. We’re trying to build the first end-to-end space company here, so I think those two things are probably the most important.