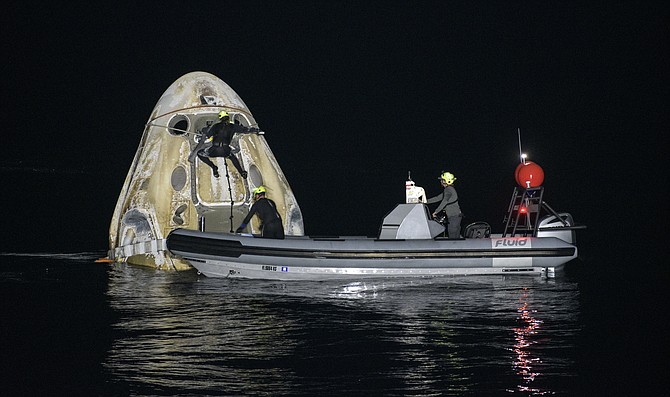 Four astronauts splashed down May 2 aboard a SpaceX-designed Crew Dragon capsule.

Four astronauts returned to Earth from the International Space Station aboard a Space Exploration Technologies Corp.-designed Crew Dragon capsule May 2, splashing down in the Gulf of Mexico just before 3 a.m. local time.

According to NASA, it was the first nighttime water landing since the Apollo 8 mission in 1968.

This crew departed from the space station May 1 — a week after the arrival of a new four-person crew, also transported aboard a SpaceX launch vehicle.

“We’ve accomplished another incredible spaceflight for America and our commercial and international partners,” said newly confirmed NASA Administrator Bill Nelson. “Safe, reliable transportation to the International Space Station is exactly the vision that NASA had when the agency embarked on the commercial crew program.”

Under its contract with NASA, SpaceX is set to complete another four crew rotation missions. The company also works with the space agency to transport cargo to and from the space station aboard modified Dragon capsules. The next cargo launch is planned for June 3.

The four astronauts transported to the space station last month are also expected to remain aboard the space station for about six months before returning to Earth. SpaceX and NASA are planning another crew rotation mission tentatively set to launch in October.