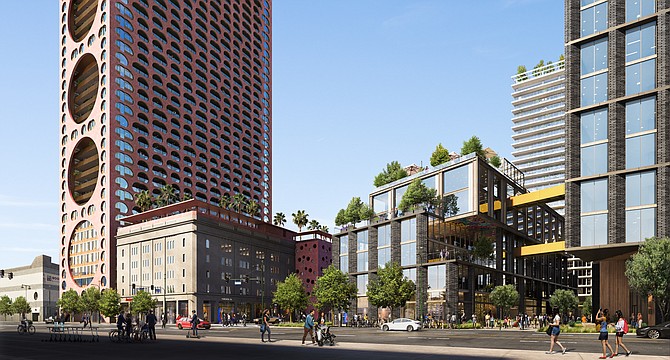 A rendering of Fourth & Central.

A large project has been proposed for a 7.6-acre site at 4th Street and Central Avenue in downtown that would replace an industrial facility with more than 2 million square feet of residential, creative office, retail and hotel buildings.

The development, on the border of Skid Row, Little Tokyo and the Arts District, is estimated to cost $1.5 to $2 billion, according to the Los Angeles Times.

“L.A. Cold Storage will find a new home at a more fitting location, and our current site will be a new home and community to thousands of Angelenos — that gives me a tremendous amount of pride,” Los Angeles Cold Storage President Larry Rauch said in a statement.

If approved, the project would have 1,521 residential units, 401,000 square feet of creative office space, 93,000 square feet of retail and restaurant space and a 68-room hotel.
The site would house 10 buildings, ranging in size from two to 42 stories.

“Fourth & Central is part of the evolution of DTLA into a dense, walkable, bikeable, and durable 21st century community that preserves the character and history of the neighborhood,” Mark Falcone, chief executive and founder of Continuum Partners, said in a statement. “We’re thrilled to have an opportunity to add a mix of housing options and community-minded placemaking so close to the job-producing and creative core of Los Angeles.”

The project’s master plan and architecture is being designed by Long Beach-based Studio One Eleven.

Two marquee buildings are being designed by David Adjaye, known for his work on the National Museum of African American History & Culture in Washington, D.C. This will be his first ground-up L.A. development.

“Fourth & Central provides an unmatched opportunity to leverage major transit improvements in a way that responsibly uplifts the community with increased housing and commercial opportunities,” Alan Pullman, founding principal of Studio One Eleven, said in a statement.

“Working with David Adjaye and his team, we’ve designed an open, street-level plan that incrementally connects with the neighborhood, providing diverse buildings, a rich mix of uses, and abundant green space — all human-scaled and accessible.”

Construction on the project is expected to begin in 2024.