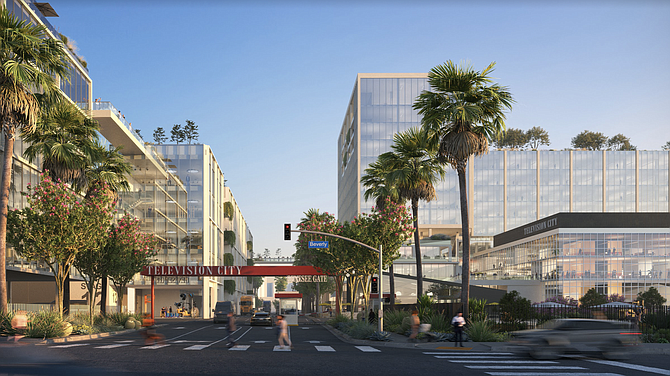 RIOS is the architect behind Television City's new design.

Culver City-based Hackman Capital Partners and affiliate MBS Group have released plans for a $1.25 billion investment in Television City, a facility once owned by CBS that Hackman purchased in 2019.

Under Hackman’s TVC 2050 proposal, the Beverly/Fairfax District site will remain a studio property.

Television City spans 25 acres and operates as a studio and broadcast facility with 750,000 square feet of stage, office and production support space.

The company plans to develop up to 1.13 million square feet of new space on the property. That includes the creation of up to 15 new soundstages, as well as production office and support facilities next to the stages.

“Television City is one of the great Hollywood studio lots. We are committed to ensuring it remains a robust job creator and world-class studio for decades to come,” Michael Hackman, founder and chief executive of Hackman Capital Partners, said in a statement.

“Los Angeles lacks the modern soundstages and production facilities to meet market demand, putting our region at risk of seeing the entertainment industry leave the state if we fail to invest in its future,” he added.

Rios Inc. is the architect behind the new design, which will be sustainable and adhere to the site’s Historic-Cultural Monument status.

The site overhaul is expected to create thousands of entertainment and construction jobs.

A study by the Los Angeles County Economic Development Corp. found that the investment would generate $2.1 billion in total economic output during construction along with an annual average of 4,220 direct, indirect and induced jobs throughout construction.

“To remain globally competitive, Los Angeles needs more state-of-the-art soundstages and production space. Now is the time for a fully realized Television City, as the entertainment industry and the city continue to recover from the Covid-19 pandemic,” Bill Allen, LAEDC chief executive, said in a statement. ”

The Television City revamp isn’t the only studio-related news from Hackman Capital Partners this year.

The company, in partnership with Square Mile Capital Management, acquired the Sony Pictures Animation Campus in Culver City for $160 million. The property, located at 9050 Washington Blvd, is near Culver Studios and the Culver Steps, which the two also own.

The site consists of three buildings and 182,000 square feet. It also has parking and amenities including a screening room.

Also this year, Hackman Capital and MBS formed a joint venture with Raleigh Studios to manage the Raleigh campus in Hollywood.

The property spans 10 acres, has 13 soundstages and dates to 1915. It’s the oldest continuously operating film and television production facility in the United States, according to Hackman Capital. In the 1980s, new soundstages were added to the campus, which is across the street from Paramount Pictures Corp.’s studio.

Hackman Capital and MBS will also run operations at Raleigh’s Saticoy Studios, a 49,500-square-foot studio facility in Van Nuys that has two soundstages and office space.