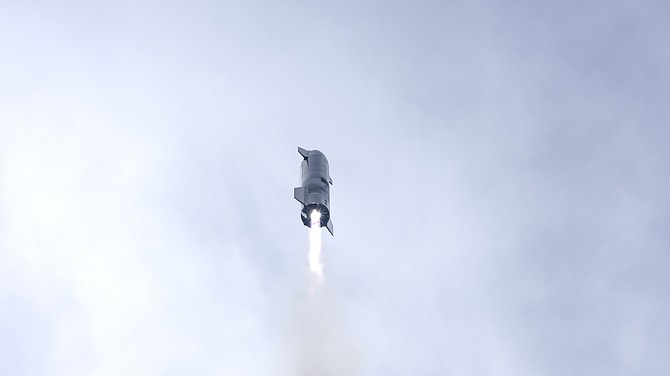 SpaceX has conducted multiple tests of its Starship spacecraft, including this Starship SN10 high-altitude flight test on May 5, 2021.

Hawthorne-based Space Exploration Technologies Corp. is aiming for the first orbital flight of its Starship spacecraft in July, according to company President Gwynne Shotwell.

SpaceX has yet to receive regulatory approval for the launch from the Federal Aviation Administration, which still must perform an environmental impact review of Starship launches at the company’s test site in Boca Chica, Texas.

“I am hoping we make it, but we all know this is difficult,” Shotwell said June 25 at the National Space Society’s International Space Development Conference, where she announced the company’s plans. “We are really on the cusp of flying that system, or at least attempting the first orbital flight of that system, in the very near term.”

The first successful flight of SpaceX’s Starship prototype occurred in early May when the vehicle flew around 10 kilometers before landing six minutes after liftoff. Four other test launches of the Starship prototype between December and March failed.

In other SpaceX developments, the company executed its 20th mission of the year on June 30, launching 88 satellites into orbit.

The mission was part of SpaceX’s SmallSat Rideshare Program, which was created to take multiple satellites into orbit during a single launch as a way to lower costs for customers.

A Falcon 9 rocket deployed 85 commercial and government satellites and three SpaceX Starline satellites after the launch from Cape Canaveral Space Force Station in Florida. The launch was delayed 24 hours after a wayward plane flew into the rocket’s airspace moments before the planned liftoff.