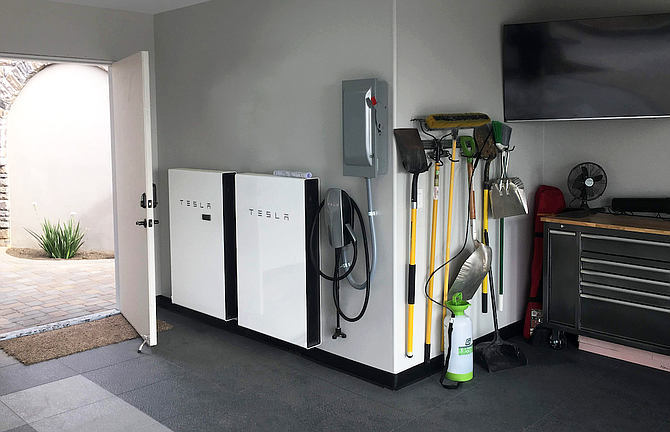 The Santa Monica-based business is networking thousands of battery storage customers into giant “virtual power plants” that can be put into service when power supplies are stretched thin.

Last month, Swell Energy launched an ambitious effort to sign up residential and business customers in Orange, Santa Barbara and Ventura counties to participate in these power plant networks.

This in turn allows utilities such as Southern California Edison, a unit of Rosemead-based Edison International, to send their grid power to other customers who need it, reducing the chances for rolling blackouts.

“We call it a virtual power plant in a box,” said Swell Energy Chief Executive Suleman Khan. “Utilities are now looking at their customers behind the meter as part of their power portfolio, and that’s where we come in.”

Khan founded Swell Energy with Andrew Meyer and Matthew Rising nearly seven years ago. Meyer and Rising have since left, but the company’s approach remains intact.

At around this time — 2014 and 2015 — battery prices were falling, making them more affordable to install.

Swell doesn’t make the batteries. Rather, it procures battery storage units from manufacturers — chiefly Palo Alto-based Tesla Inc. — and then installs them. In most cases, the batteries are connected to solar panels. They store energy as it is being generated during sunlight hours when energy prices are low and then release energy on demand after the sun goes down, either to the residential customer or to the grid during times of peak demand.

This is the classic time shift strategy: storing energy when prices are low and releasing it when energy prices are high. That achieves considerable savings on utility power bills, even more than just having solar power alone, without the battery.

But very quickly, a second use for the batteries emerged as a backup power source when the electricity supply is shut off. Utility power shutoffs have become much more common in recent years, especially in wildfire zones, as a way to reduce the chance of utility transmission lines or equipment sparking and causing wildfires.

That’s what drew Katie Davis, a homeowner in Goleta, to Swell Energy early in 2020.
“We moved into a house in 2018 that already had solar panels,” Davis said. “But we are in a zone that’s prone to power shutoffs in high fire danger conditions, so we were looking for backup for when the power goes off. That’s when we found out about Swell Energy.”

Davis and her husband purchased the Tesla battery from Swell Energy. The cost was about $8,000 after two government rebate programs. Most customers add the battery into the overall solar installation lease package.

Davis and her household recently got hit with a power outage, putting the year-old battery to the test.

Swell Energy’s mission goes beyond helping individual customers save on power bills and keep the lights on when the power goes out. From the get-go, the company set out to change the often acrimonious relationship between solar panel installation companies and electric utilities.

For the last two decades, solar panel installers and utilities have fought repeated battles in the state Legislature and at the state’s Public Utilities Commission over who pays for the impact of increasing numbers of solar power customers.

Utilities have sought to impose exit fees on customers who get solar panels installed and thereby seek to reduce their dependence on the grid. The utilities, fearing a shrinking customer base, claim the fees are necessary to offset the fixed costs of maintaining the grid.

“Rather than engage in this battle, we went to the utilities to help figure out how to best use that battery behind the meter,” Khan said. “The idea was to dispatch the stored energy en masse to the grid when the utility most needs it, not just when generated. In the process, the utility would be working with us to find solar customers, not fight over metering charges.”

That collaborative effort led to the virtual power plant initiative. Edison has identified portions of its grid that are in most need of additional battery storage.

In Santa Barbara and Ventura counties, Edison is required to secure additional megawatts to offset the loss of natural gas fuel from the Aliso Canyon natural gas storage facility, which in 2015 experienced the largest natural gas leak in U.S. history.
In Orange County, Edison needs additional power for new residential and business developments that have recently come online or are in the pipeline.

Edison is counting on Swell’s virtual power plant to come up with these additional megawatts, both for these two areas and for its overall grid. Swell has been given a target to sign up 6,000 customers in Santa Barbara and Ventura counties and another 2,000 customers in Orange County.

“This is part of our effort to save 830 megawatts of power this summer through a range of customer programs to reduce the use of energy from the grid,” said Bill Walsh, vice president of energy procurement and management for Southern California Edison.

“Batteries are still an expensive add-on to a solar installation, hence not always a choice customers want to take when reviewing their options,” Yayoi Sekine, head of decentralized energy for BloombergNEF, a strategic research provider covering global commodity markets, said in an email. “But residential energy storage is going through a significant uptick in demand, especially in California. This is significantly driven by households that want to avoid outages, which have become more common as utilities manage wildfire risks.”