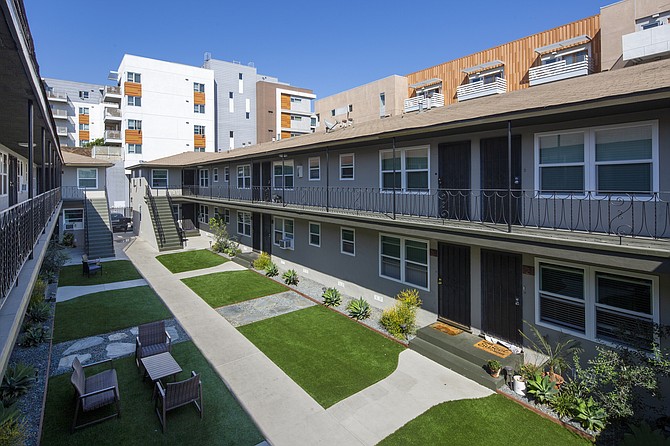 Mega projects and multimillion-dollar multifamily sales may make headlines, but a large portion of the real estate market in Los Angeles is comprised of small apartment buildings.

“L.A. is a really interesting apartment market because it’s incredibly fragmented,” he said.

In 2020, 764 apartment buildings traded hands in the city of Los Angeles, for a total of more than $3.1 billion. The average multifamily building changing hands had 15 units, and the average sales price was $4.1 million.

“We’re seeing a big influx of capital coming into the marketplace, especially on the private capital side,” he said. “We’re seeing a run-up in inflation right now. The stock market is a flip-of-the-coin thing right now where people don’t know where it’s going, so we’re seeing people moving out of stock and into more tangible assets.”

When the pandemic first hit, Withers said he saw a slowdown in sales. Now, though, “it’s more business as usual,” he said, adding that low interest rates are a big part of the interest now.

“We’ve got a couple really good things going on. These multifamily properties, these smaller multifamily properties, they aren’t building many of them. They’re hard to build,” he added. “These B- and C-class workforce housing properties, it’s kind of like you’re in a safe asset class because you are buying them below replacement value; they are not building enough of them to keep up with demand, and they are good, stable assets.”

Kimberly Stepp, a principal at Stepp Commercial, added that despite high demand, there’s not a lot of availability.

“There’s a lack of inventory, and the interest rates are historically low, and people want to buy right now. There are a lot of buyers and not enough sellers,” Stepp said.
Real estate experts say they are seeing new investors enter the multifamily market. Some are individuals growing a portfolio to retire on, while others are retail and office investors who have moved into multifamily.

“There are more people coming into multifamily than going out,” Blackwell said.

Turner launched Dunleer in 2014, focusing on small apartment buildings of 25 units or fewer. Today, the company does more acquisitions of properties with 25 to 75 units but still owns some smaller properties.

“It’s easier to get your arms wrapped around the real estate when you have a smaller apartment building,” Turner said of why he started off with smaller assets.

He added that the properties appeal to owners who are not necessarily real estate professionals due to their price points as well as the less management-intensive nature of the buildings.

Turner said many investors start their real estate portfolio by purchasing buildings with about eight units and using the cash flow to purchase more properties.

Henry Manoucheri, chairman and chief executive of Century City-based Universe Holdings Development Co., said that while the company buys a lot of larger assets, it is also interested in small properties in markets where the company is already established.

For smaller properties, Manoucheri said, Universe Holdings looks for a “unique property in a great location where there is a substantial upside.”

This often comes from historical landmarks and from generational sellers where the family has owned a property for 40 or 50 years.

The company recently started expanding outside of California, making its first acquisition in New Jersey. Manoucheri said he is interested in larger properties in the new markets the company is entering.

“It’s much easier to control costs and buy one larger complex,” he said.

Blackwell said that when it comes to small multifamily properties, most investors have something specific in mind.

“What most investors are looking for is typically the value-add, long-term investment where you can go in and do a cosmetic value add, maybe taking the property from a C to a B over time,” Blackwell said.

“It’s the fundamentals across the board in any product type. It’s location driven. And they would like to see some upside in rents and have a value-add component. But location is driving it right now,” he said.

Some buyers also look to improve the asset’s performance by replacing ineffective management with better operators, whether the company is managing the building itself or using third-party managers.

Another way to improve a building’s performance, experts say, is adding things like accessory dwelling units, which more buyers are adding to their properties because they provide additional rentable units.

“Any property that has the capability of an ADU, it’s a selling point and a buyers’ hot point as well,” Stepp said.

Blackwell added that it was cheaper to build ADUs than to buy more units, increasing the desirability for properties with that capability.

He has also seen a lot of interest in stabilized assets.

“A stabilized asset is very popular right now.” Blackwell said. “You can go in as an investor and not do a lot of heavy lifting. We have more rent control now than we ever did before, and the cost of materials is on the rise.”

Experts expect demand in multifamily assets to remain high, but they said there is one potential complication: a lack of knowledge about potential changes to the tax code.
Possible changes to 1031 exchanges are top of mind for many. Under a 1031 exchange, sellers avoid paying capital gains taxes by reinvesting sale proceeds within a set time frame or vice versa in a reverse exchange.

Withers said, “there’s still a lot of uncertainty on what will happen in the marketplace … as we get a clearer picture, transactions are going to increase.”

Stepp said some owners have become concerned about potential 1031 exchange changes as a result.

“They’re fearful that if they don’t act now, they might not have the opportunity to do 1031 exchanges. A portion of the inventory on the market now is like that,” she said. “Some pros, some people that have been in the business awhile are selling their portfolios and moving their money to red states in particular in exchanges right now or different product types.”

Stepp called it “fear-based selling” and added that some are “asking crazy pricing.”
Blackwell said concern about tax code changes has “fast-forwarded a lot of decision-
making from ownership. There may be owners now that are making the decision to sell that were planning to sell 12 or 24 months out.”

He added that because the market is so hot right now, sellers are more motivated as well.

Experts predict that small multifamily buildings will remain in demand.

“As long as the inventory stays low, the pricing is going to stay high,” Stepp said. “That’s what we’re seeing. It’s not slowed down at all.”

“We’re going to continue to run a two-track type operation: one side of the company focusing on the smaller deals and trying to buy lots of them, and track two is focusing on larger assets,” he said.