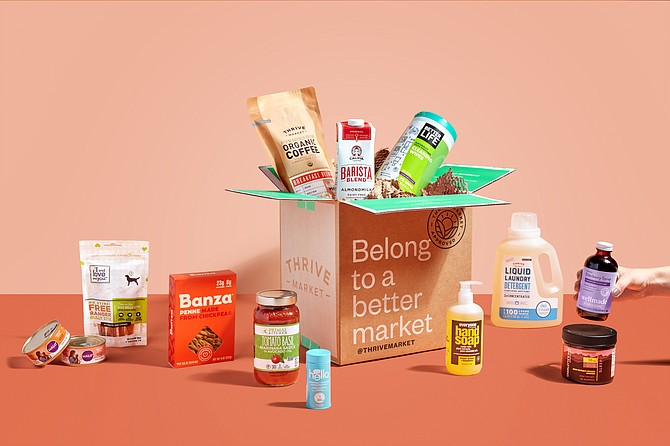 As more people think twice about what’s on their plate, the natural and plant-based food industries in Los Angeles have boomed.

Natural, organic and functional food and beverage sales in the United States hit $186 billion in 2020, up 13% from $161 million in 2019, according to Boulder, Colo.-based research firm New Hope Network.

The plant-based food industry saw record sales of $7 billion in 2020, up 27% from $5.5 billion the year before, according to Good Food Institute, a Washington D.C.-based nonprofit.

Los Angeles is leading the way in this sector, and the city has seen several new companies enter the space in recent years.

These businesses offer a range of approaches to natural and plant-based foods, and they’re each looking to create environmentally friendly and healthy alternatives to traditional diets.

Companies such as Beyond Meat Inc., Thrive Market Inc. and Daring Foods Inc. are helping to drive the industry’s growth by attracting funding, striking major retail partnerships and expanding their operations.

“A lot of consumers of plant-based solutions for reducing (carbon) emissions live in (Los Angeles) and have been living with this lifestyle choice for years,” said Robert Moskow, senior analyst in the food and food retail sector for Zürich-based investment bank Credit Suisse Group.

In California the specialty foods industry, which encompasses natural, organic and plant-based foods, was worth $3 billion in 2019 with more than 6,900 specialty food businesses in the state, according to New York-based market research company IBISWorld.

A recent study by Berlin-based apartment rental aggregator Nestpick Global Services found that Los Angeles is also the most vegetarian-friendly city in the U.S. based on the affordability of plant-based protein products and the number of vegetarian restaurants and businesses.

The success of the natural and plant-based food industries in part stems from the growing number of consumers who are rethinking the way they eat.

A survey by New Hope Network found that 77% of consumers take their personal health more seriously today than they did a year ago.

The plant-based and natural food industries have grown in both the city and the state in recent years because consumers here have long been more focused on health and wellness, he said, adding that other regions tend to adopt food trends started in California.

“A lot of new trends started in California, no question about it,” Matthews said.

The plant-based and natural foods industries are expected to grow further. Zürich-based investment firm UBS Group predicts that the global plant-based foods industry will be worth $50 billion by 2025.

The natural, organic and functional food industries are expected to grow to $300 billion globally by 2024, according to New Hope Network.

Tristan d’Aboville, a consumer staples analyst for Playa Vista-based independent advisory firm William O’Neil and Co., said major food businesses have been increasingly moving into the space with their own products, with companies such as Nestlé and General Mills Inc. fueling competition in the market.

“(Natural and organic foods) is an industry that has been much more crowded now,” d’Aboville said. “All of the largest staples around the world have been moving toward that direction.”

Here’s a look at some of the major players and up-and-coming companies in the natural and plant-based food industries in Los Angeles.

Uplifting is the creator of Muniq, which offers prebiotic shakes that help with blood sugar control, gut health and weight control. The company offers vegan versions of two of its three flavors.

“I know there’s a market opportunity and a need for nutrition and natural products that are truly based in science and could truly help people get in control of their health,” Washington said in an interview in January.

Washington is a health and wellness industry veteran who previously worked in executive positions at companies such as Wonderful Co. and BeachBody.

Uplifting closed a seed round of $8.2 million in January and plans to bolster hiring, increase brand awareness and continue clinical research to create products that tackle common health issues.

Thrive Market is an online, membership-based grocery delivery service founded by Nick Green, Gunnar Lovelace, Kate Mulling and Sasha Siddhartha. The company prides itself on offering more than 6,000 healthy and sustainable products and allows users to shop by diet or lifestyle — such as vegan, certified gluten-free and non-GMO — on its website.

Thrive Market has more than 600,000 members and offers prices that are roughly 25% to 50% less than traditional retailers. The company is also the largest online grocer to date to receive B-Corp certification, which measures the social and environmental performance of a company.

“Thrive Market is trying to build a company and an infrastructure that could last 100 years,” Green said in a statement.

Amid the pandemic, the company launched a Covid-19 relief fund, raising more than $1 million for 30,000 families.

Founded by Nicolas Jammet, Nathaniel Ru and Jonathan Neman two months after they graduated from Georgetown University, Sweetgreen said it offers a “plant-forward” menu of salads and bowls that are 30% less “carbon intensive” than average American meals.

The company has 118 locations across the United States and close to 4,000 employees.

As of 2021, Sweetgreen has a valuation of $1.78 billion. Bloomberg reported in May that the company is working with Goldman Sachs & Co. on an initial public offering.
In March, the company announced plans to become carbon neutral by 2027.

“Simply put, we believe it’s the right thing to do for our business and for the planet,” Jammet, Sweetgreen’s chief concept officer, said in a statement. “With the food system driving 25% of global greenhouse gas emissions, the time for change is now.”

The company, which was founded by Ross Mackay, said its goal is to “remove chicken from our food system.” Daring products can be found on the shelves of retailers such as Sprouts Farmers Market Inc. and Costco Wholesale Corp.

“This past year has been transformative for us,” Daring Chief Executive Mackay said in a statement.

The company plans to be in more than 4,000 retail locations and to triple its staff by the end of 2021.

“We’ve been able to work with major retailers across the country to expand our in-store presence … to advance our unwavering commitment toward making plant-based meat options that are better for people and the planet more accessible to all,” Chuck Muth, chief growth officer, said in a statement.

Beyond Meat landed a partnership with Yum Brands Inc. in February to offer plant-based items at fast-food restaurants including KFC, Pizza Hut and Taco Bell. Also in February, the company announced a joint venture with PepsiCo Inc. to create snacks and beverages using plant-based ingredients.

Beyond Meat announced plans in April to ramp up distribution in the United Kingdom, Germany, Austria, Switzerland and the Netherlands.

When Michael Kuech was diagnosed with cancer at 24, his girlfriend Kristel de Groot began developing superfood and plant protein mixes to boost his immunity. After Kuech’s recovery, the couple launched Your Super, a direct-to-consumer company that sells “superfood” powders with locally sourced ingredients in 10 flavors.

“After having the two people closest to me, my mom and boyfriend, go through cancer, switching to a plant-based, whole food diet seemed like such a small thing to change,” De Groot said.

The company was founded in Berlin and moved its headquarters to Venice in 2018. Your Super has had more than 1 million orders from more than 400,000 customers.
The company closed a $10 million funding round in March 2020 led by food-focused growth equity firm PowerPlant Ventures. The funding was used to expand its team and develop new products. The company more than tripled its staff in the past year, up to more than 80 from 25 in 2020.