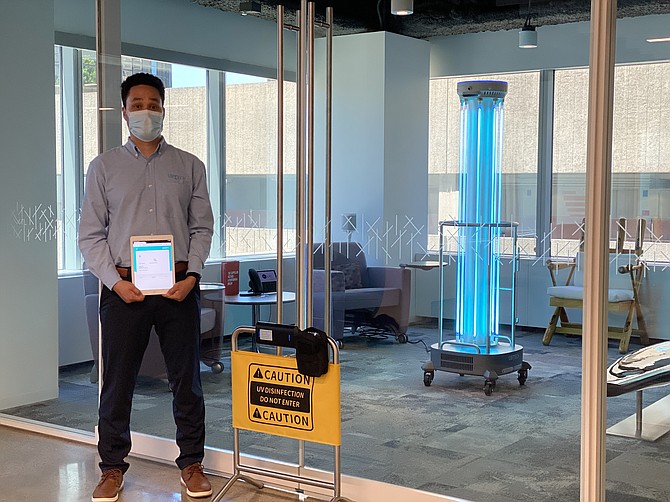 Instead of using the pandemic as a quiet period, downtown-based real estate investment firm Coretrust Capital Partners has used the time to make improvements that would normally take much longer on some of its office properties.

Thomas Ricci, a managing principal at the company, said in the past six months the group had made improvements to L.A. properties FourFortyFour South Flower in downtown and Pasaroyo in Pasadena, as well as a property elsewhere. That work would normally take 12-18 months, he explained.

Ricci said the group’s objective was to create a safe space that “made tenants want to come back.”

In the last few months, the company has added things like Adibot UV-C Disinfection Robots from Ubtech Robotics Inc., an air filtration system designed by Ramtek and individual air purifiers in each elevator cap.

Ubtech has become a tenant at Coretrust’s Pasadena property, which the company partially attributed to the work Coretrust was doing to make the building safe.

The group’s robotic cleaning system, which uses UV technology to disinfect air and surfaces, can be started using an app or remote control. The light does not extend beyond glass.

Because UV lights can be harmful to humans, the robots stop cleaning if they sense someone entering a room.

“We spend much of our daily lives at our offices, so it is a smart strategy for landlords to use intelligent robots as an added cleaning layer to create safer and healthier workplaces,” John Rhee, general manager at Ubtech, said in a statement.

The robots can disinfect a roughly 900-square-foot room in about three minutes. The devices are on wheels and can easily be moved around to disinfect different areas.

Coretrust Capital Partners had also done some updates ahead of the pandemic at its downtown property, which Ricci said helped with its safety and wellness offerings.
“We were ahead of the curve, and now we’re done,” he said.

Prior to the pandemic, the company spent roughly $4 million on just one floor at 444 S. Flower St. to create its Workplace Innovation Lab, a 22,000-square-foot space used as a showcase for potential tenants and brokers.

Coretrust has also invested in touchless elevator systems and a touchless parking garage entry at the building.

One of the company’s biggest endeavors, however, was cutting a corner out of a wall on the fourth floor to create a 1,000-square-foot terrace.

Ricci said these spaces can be created for tenants as well.

He said that the features Coretrust has recently added, along with those put in place before the pandemic, made its properties among the safest and cleanest in the country.

Ricci and Randall Scott, another managing principal at the company, have been seeing interest in the property.

Scott said the property is currently at about 20% of its pre-pandemic occupancy, but he predicts “that’s going to ramp up significantly over the summer.”

Ricci said the company has seen strong rent collections and interest from large tenants in leasing space at the building.

In late April, it was announced that Syska Hennessy Group had signed a lease for 14,000 square feet of office space at the building for the company’s new West Coast headquarters. It will relocate there from Culver City in July.