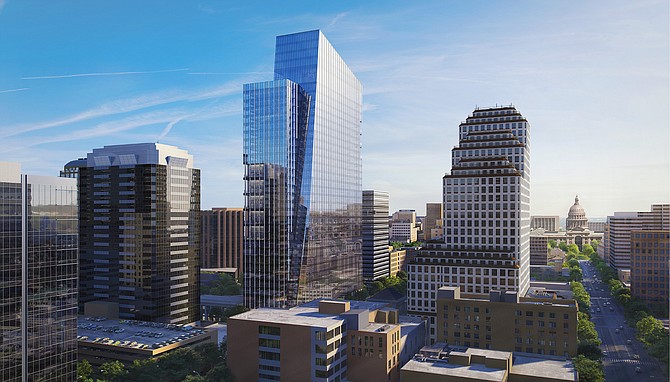 Sawtelle-based Kilroy Realty Corp. made three acquisitions outside Los Angeles in June 2021 for a total of $670 million. The deal included the newly completed Indeed Tower in Austin, Texas, for $580 million.

Sawtelle-based Kilroy Realty Corp. is continuing its expansion across the Western United States.

The real estate investment firm announced June 16 that it had made three acquisitions outside Los Angeles for a total of $670 million. The deals are for the newly completed Indeed Tower in Austin, Texas, along with a parcel in San Diego and a ground lease under a Kilroy office project in Washington.

All three acquisitions are expected to close by the end of the third quarter.

The biggest purchase is the Indeed Tower in Austin’s central business district. Kilroy spent $580 million on the development, which in addition to a 36-story tower that holds 730,000 square feet of office space, includes a private park and retail space. The property is walking distance to hotels, restaurants and event venues.

“I can’t overstate how well Indeed Tower fits with our strategic and property objectives,” John Kilroy, the company’s chairman and chief executive, said in the announcement.

“It is arguably the best building in Austin, is in one of the best locations, provides us with scale that will support future growth, is anchored by an investment grade technology tenant and provides a value-add opportunity through lease-up in an office market that is strengthening,” he added.

In a presentation to shareholders, Kilroy said that more than 80% of its top 15 tech tenants already have a presence in Austin.

The Indeed Tower, which was developed by Trammell Crow Co., is 57% leased, according to the Austin American-Statesman. Indeed Inc. holds a lease for 42% of the space.

In Washington, Kilroy paid $47 million to purchase the groundlease for its 488,000-square-foot Key Center project in Bellevue, Wash.

The company said the purchase eliminates its ground rent obligation, which it expected would increase significantly in the next few years.

Kilroy also spent $42 million to acquire 2045 Pacific Highway in San Diego’s Little Italy neighborhood. The company plans to develop up to 270,000 square feet of office space on the site, which covers a full city block.

The planned buildings would be within walking distance of San Diego Bay and would provide panoramic ocean views.

Kilroy already owns a nearby property, 2100 Kettner Blvd., and the company said the new Pacific Highway location would be a companion piece providing more space and options for existing tenants.