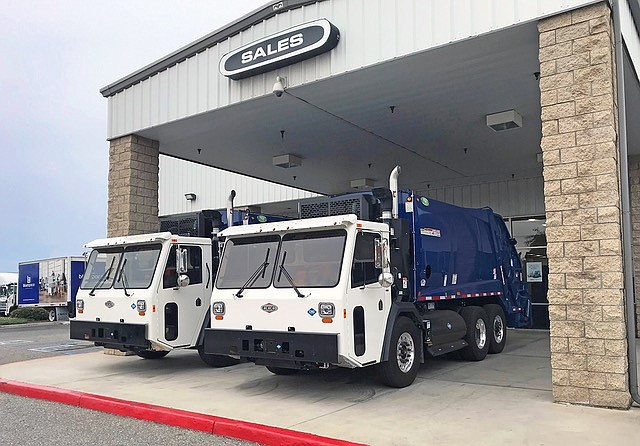 The stations, which average about $50,000 to permit and install, are part of a larger plan by Battle Motors Chief Executive Michael Patterson to build out a coast-to-coast electric vehicle infrastructure to support EV trucks that the company is building in New Philadelphia, Ohio.

“Municipalities won’t have to deal with permitting and the site inspections. We take that off of their hands. It’ll be one-stop shopping,” Patterson said.

Patterson was previously with Romeo Power, which he left at the end of last year after helping to take Vernon-based Romeo Systems Inc. public. Romeo manufactures lithium-ion battery packs for electric vehicles.

Patterson formed Battle Motors in early March, then led an acquisition of EV-commercial vehicle manufacturer Crane Carrier Co. in a move that gave the company a production line for EV trucks in Ohio.

Crane had roughly $60 million in sales in 2020, but Patterson forecasts $140 million to $180 million this year through his expansion plans.

Patterson is looking to expand the company's truck-making capacity from a 130,000-square-foot factory to a 400,000-square-foot facility at that site. He also expects to increase the number of production lines from four to eight for Battle's garbage trucks and eight-wheeled delivery trucks.

Patterson is also considering a factory in the Los Angeles area, possibly in Vernon, El Segundo or through a lease for 400,000 square feet at the former home of Boeing Co.'s C17 cargo plane plant on Wardlow Road in Long Beach.

“There’ll be eight production lines in Ohio and eight on the West Coast,” Patterson said.

Battle Motors also is nearing a lease to move its headquarters to Santa Monica, where it is considering a showroom to display its trucks.

Crane Carrier's EV garbage trucks are already humming around the streets of Beverly Hills, Malibu, Santa Monica and Venice, as well as freeways maintained by the California Department of Transportation.

PositivEnergy will be involved in permitting and installing the charging stations, Patterson explained.

“Why the trucking business? The trucking industry generally needs a good kick in the a--. There’s got to be a passion for electrification of trucks on the West Coast,” he said. “What we are doing is enabling the decision to be made when buying electric trucks to have a place to charge them. We are taking care of the infrastructure and packaging the two.”