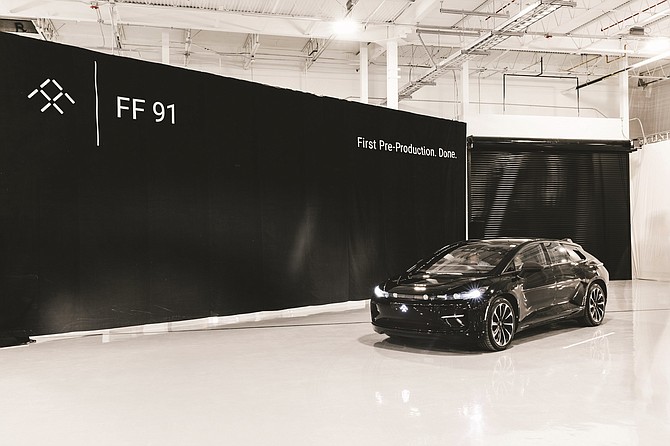 The Gardena-based company went public in a deal with New York-based blank check company Property Solutions Acquisitions Corp. that gives the beleaguered auto maker $1 billion toward the production of its flagship FF 91 crossover vehicle, which it plans to release within the next 12 months.

Under the deal, the newly combined company will be renamed Faraday Future Intelligent Electric Inc. It's trading under the ticker symbol FFIE.

faced a slew of leadership and financial challenges. It used up $2 billion in funding and abandoned plans for a $1 billion factory in Nevada, while several top executives resigned.

Breitfeld, who served in management roles at BMW, took over as Faraday’s chief executive in 2019 and is guiding the company through its next act.

tors for their support. Reaching this milestone is a testament to the trust and confidence that such stockholders and investors have placed in our leadership, technology and business model," Breitfeld said.

The vehicles will be manufactured at a factory in Hanford, Calif., where Faraday Future is investing $90 million in a remodel. The company claims it will be able to produce 10,000 cars daily.

Faraday Future also has its an eye on the Chinese market and recently hired Xuefeng Chen as the chief executive of its China division. Chen has more than 20 years of experience in the automotive industry.