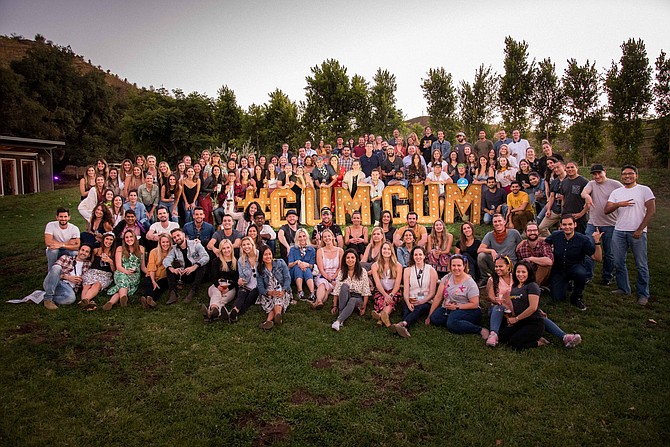 After more than 15 years working in the advertising industry, Charlotte Cochrane understands the power of a well-placed ad to boost a brand’s sales.

Cochrane is the head of digital for New York-based media agency Initiative, and in this role and in previous jobs, she has contracted with GumGum Inc. for its contextual advertising technology.

“We’ve been working together for quite a long time because we have clients who are interested in matching the right audience with the right context and the right content,” Cochrane said.

GumGum and Initiative previously partnered on a campaign for Costa Mesa-based fast-casual restaurant franchise El Pollo Loco Inc. GumGum’s technology placed ads on websites with lunch and mealtime content that would attract customers that were in the “mindset of food,” subsequently lifting the company’s in-store visits.

As third-party cookies fade in popularity and more consumers plow through digital content, GumGum’s contextual advertising technology is capturing the attention of investors and clients, positioning the company for growth.

GumGum already works with more than 100 major brands and 1,200 publishers globally. The company, which has raised $143 million since its founding in 2008 — including a $75 million investment earlier this year — has three U.S. offices and two international offices, employing 109 people locally and 210 worldwide. Some of its major clients include camera company Canon Inc., cleaning supply company Clorox Co. and consumer goods company Unilever.

GumGum’s technology, which performs contextual analysis on more than 50 million unique pages and videos daily, doesn’t only look for content that would be a good fit for an ad. It also looks for potentially risky content.

Phil Schraeder, GumGum’s chief executive, said the company’s technology is different from third-party cookies, which track the web history of users as they browse. Instead, GumGum analyzes the web page itself.

Third-party cookies only collect small, individual pieces of information and often miss the broader picture, Schraeder said, which rules out web pages that in some cases might actually perform well for certain ads.

“If I’m writing content about key lime pie, and I say I have ‘the best recipe for killer key lime pie,’ it’s blocked (by third-party cookies) because of the word ‘killer.’” Schraeder said. “An advertiser has fear that being around ‘killer’ with an ad could be detrimental to the brand. But it’s great content.”

To protect users’ privacy, Google plans to stop using cookies and will no longer allow publishers to use them on Chrome browsers starting in mid-2023. Google also said in March that it would no longer track users at all after third-party cookies are fully phased out.

“Comprehensive, content-level understanding of digital environments is imperative to what we’re facing today with respect to those cookies going away,” he said.
GumGum has attracted attention from investors as third-party cookies start to crumble.

Allison Berardo, consumer investor at Goldman Sachs Growth, said in a statement that GumGum is “well positioned” to benefit from the phasing out of third-party cookies.

“GumGum’s DNA is rooted in contextual, and the company has been iterating on contextual solutions for over a decade,” Berardo said. “Its contextual technology offers an alternative for brands to deliver relevant and targeted
advertising.”

The decline of third-party cookies isn’t the only reason GumGum has flourished.
The pandemic made digital advertising technology companies like GumGum even more applicable for brands.

Digital advertising revenue in the United States jumped 12% year over year in 2020 to $139.8 billion, according to a report released in April by PricewaterhouseCoopers. And in the fourth quarter, digital ad revenue broke a more than 20-year record high, the report said.

“Digital advertising really accelerated, and it’s here to stay,” Higa said. “Tools to align your brand with the right customer and to not have a negative image are going to become increasingly important in the digital age. That’s the main reason why I think something like (GumGum) would be useful.”

Amid the pandemic, GumGum’s clients initially cut back their advertising budgets, forcing the company to lay off 63 employees and “recalibrate internally,” Schraeder said.

But GumGum benefited from the pandemic in the long-term — companies that had initially dropped its services to save money ended up coming back months later, he said. GumGum was also able to bring back some of the employees it had laid off.

“It moved all of us into spending our days immersed in digital environments,” he said. “Advertisers in the industry knew that this is where consumers were spending their time.”

Now GumGum is planning to “aggressively” expand its global footprint through mergers and acquisitions.

Though the current progression of the digital advertising industry has GumGum poised to thrive, keeping up with rapidly changing consumer habits won’t be an easy feat for the company, Schraeder said.

“We’re no longer just on a desktop and a tablet. We’re not just watching TV,” Schraeder said. “We’re on Pelotons. We’re in games. We’re in VR. Digital environments become custom to our interests, and that makes reaching people ... so much more challenging.”