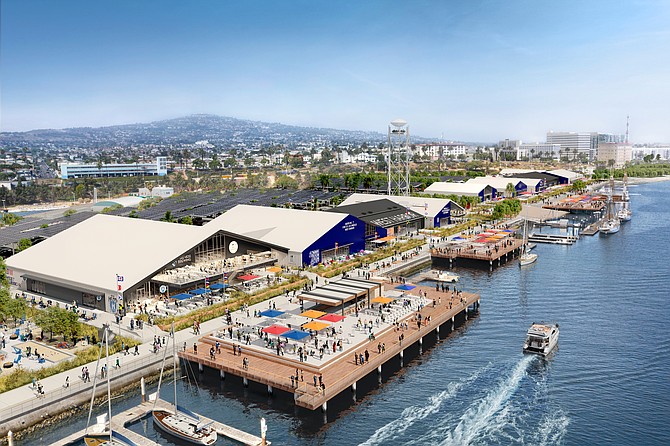 A rendering of West Harbor (Courtesy of Studio One Eleven)

West Harbor, a large development along the San Pedro waterfront, has announced a flurry of new leases.

The new tenants include the iconic Japanese restaurant Yamashiro, which will open its second location at the property with more than 3,000 square feet of patio space.

Additional leases were signed by Mike Hess Brewing, a craft brewery from San Diego, which will open its sixth location at West Harbor with a 20,000-square-foot outdoor beer garden with games; art gallery Hopscotch, which will open its first West Coast location at West Harbor with gallery and lounge space; Poppy + Rose, a popular breakfast spot in Little Tokyo, which will have a 2,000-square-foot outdoor patio and garden; Sugar Factory, a candy store; and Jay Bird’s Chicken, a Nashville-style hot chicken restaurant opening its sixth location. The development’s seventh restaurant will be a Mexican cantina.

West Harbor is being developed by Ratkovich Co. and Jerico Development Inc. in a partnership with the Port of Los Angeles.

“The caliber of food, beverage and entertainment brands that have signed on to West Harbor — several for their first-ever satellite or first locations in Los Angeles — affirms what an unprecedented, world-class waterfront destination this will be,” Wayne Ratkovich, chairman of Ratkovich Co., said in a statement. “West Harbor will be a signature development for the region, and these leases announced today show the quality of offerings that will draw people to the L.A. Waterfront. We anticipate the remaining space to be signed up by year-end.”

Retail Insite worked on the leases, the terms of the which were not disclosed.

“We are pleased to see the West Harbor team deliver such a strong mix of hospitality and entertainment entities for their development,” Port of Los Angeles Executive Director Gene Seroka said in a statement. “This milestone builds on the billion-dollar investment in public access infrastructure the Port of Los Angeles has made over the past two decades — including $100 million in waterfront and recreational infrastructure for this exciting development.”