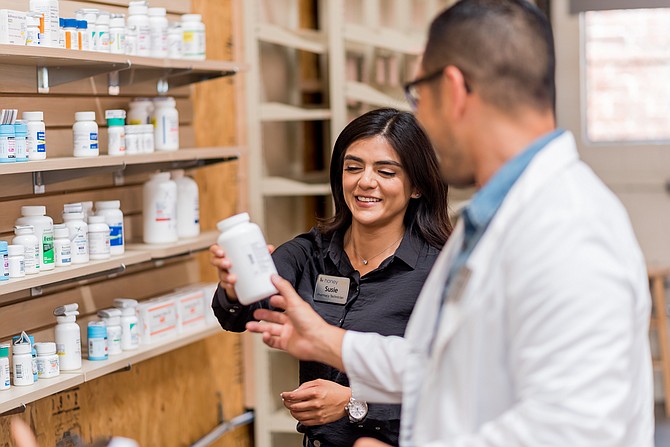 Susie Morales of Honeybee Health, which has seen a surge in orders, speaks with pharmacist James Kim. Photo by GIBBY GIB

In the midst of the Covid-19 pandemic, large swaths of the local venture investing space slowed to a crawl as investors attempted to wait out the uncertainty. One area, however, has only picked up steam since March — health care.

Local industry insiders say the Covid-driven disruption has been a boon for innovators in the health care space, shaking up both longstanding industry practices and consumer preferences.

This has widened the playing field for local startups and the venture firms that support them, providing new opportunities for the sector to take off in Los Angeles.
Most L.A. venture investing in health care businesses is a local affair. Those funds willing to dive into the space — which has historically been a relatively segregated niche within the venture community — tend to be small.

They primarily provide Angel, Seed and Series A funding to companies still firming up details about their strategies and approaches. This means companies looking for larger investment rounds typically must travel to more established venture markets like the San Francisco Bay Area or Boston.

During the Covid-19 pandemic, however, some see this relative distance becoming less important than it has been in the past.

“Covid is forcing all of us to rethink our communication strategies,” said Ahmed Enany, president and chief executive of the downtown-based Southern California Biomedical Council, a life sciences trade association.

Enany said the necessity of remote work and virtual meetings has made geographic proximity between investors and entrepreneurs less critical to success. This could mean that a health care startup in Long Beach could be more competitive with one in Palo Alto since video conferences function the same whether a business is across town or across the state.

“When you talk to investors, they are going to complain,” Enany said. “They are going to say they can’t meet with companies and do their due diligence — and that’s true.”
“That said, we have a lot more tools at our disposal for this now than we did a few years ago,” he continued. “We need to use this as an opportunity to learn how to use digital tools to interact with each other better.”

Companies whose products are aligned with this societywide shift toward digital have already seen significant boosts during the pandemic, according to Enany. Research by his organization found that, as of September, total investments in digital health startups in the greater Los Angeles area were nearly triple those for all of 2019.

Capital inflows to this subspace were led by a handful of mammoth raises. The largest included Santa Monica-based meditation platform Headspace Inc., which has raised more than $100 million this year.

“Digital health is L.A.’s bright spot now,” Enany said. “There is more money coming in, but much of it is coming in at later-stage companies with already established clients and revenues.”

The smaller side of L.A.’s local health care investing ecosystem is also benefiting from pandemic disruption.

Jay Goss, a general partner at Wavemaker 360 Health, which provides seed investments in early stage health care businesses, said more venture dollars have become available to these innovative businesses amid shifting investor preferences.
“I know that the VC industry isn’t funding more companies now under Covid than it was, but the mix of companies it is (funding) has changed,” he said. “Just by dollars and cents, it is a good time for health care entrepreneurs.”

Goss said a number of factors have played into the increasing cash flows toward health care businesses, including a fundamental shift in the structure of the health care market.

“We think health care is going from being a vertical to a horizontal,” he said. While the main buyers of health care products have typically been established players in the health care industry, Goss said he sees other industries becoming buyers for sector-specific solutions.

“If you were on a cruise ship five years ago, you would never have picked that ship based on its health care capabilities. Now, that’s critical,” he said. “I don’t think the big companies are going to figure out a solution for cruise lines.”

Many existing local startups are also benefitting from the post-pandemic focus on health care, according to Goss, by shifting their messaging to emphasize how they help address Covid-related issues.

He raised the example of downtown-based Pragma Inc., branded as Giblib, which produces 4K and virtual reality educational surgery videos for medical professionals. That company has seen a significant boost in demand in recent months, according to Goss, as a remote learning alternative for doctors no longer able to attend continuing education conferences in person.

As a result of growing investor demand for access to innovative health care businesses, Goss’ firm raised its second fund in record time. “That process would have taken me easily 12 or 14 months in the past,” he said. “We did it in two and a half.”

“Where there is disruption, there are often good opportunities for investment whether it’s people being forced to live their lives differently or just regulatory change,” said Minnie Ingersoll, a general partner at TenOneTen. “In health care, there are all of those.”

One of TenOneTen’s portfolio companies, Culver City-based online pharmacy Honeybee Health Inc., was a direct beneficiary of both Covid-driven changes in consumer preferences and regulatory changes.

The company has seen a huge surge in orders since the onset of the pandemic, according to co-founder and Chief Executive Jessica Nouhavandi, as recently laid-off consumers search for more affordable ways to get prescription drugs.

The company was also granted temporary approval to operate in five additional states as part of Covid emergency measures, boosting its market to 47 states.

Although the temporary approvals have since expired, Nouhavandi said her company is on track to being fully licensed in all 50 states by the end of the year.

Ingersoll said these types of newly created openings for innovation and industry disruption are becoming increasingly obvious to many in the venture community, helping drive the surge toward health care investing.

“The biggest factor in uptake is that there is so much opportunity there now,” she said. “Everyone is thinking about this being the issue of our times and this as our opportunity to be part of the solution.”