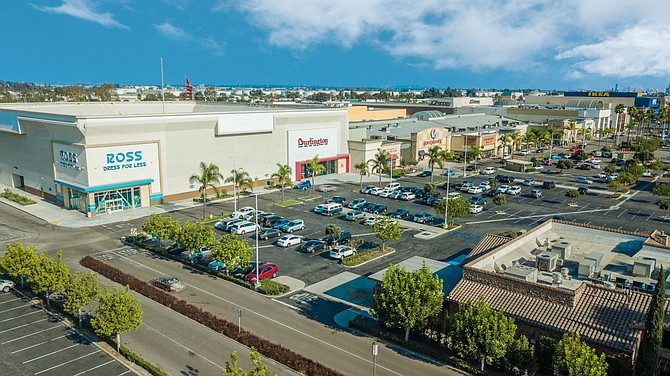 Newmark Merrill acquired The Shops at SouthBay Pavilion in September.

In addition to centers in California, the company has properties in Colorado and Illinois. Local centers include Crenshaw Imperial Plaza, Norwalk Town Square, The Shops at South Bay Pavilion, Marina Pacifica and Devonshire Reseda Shopping Center.

The acquisition of multiple buildings at South Bay Pavilion in Carson was announced Sept. 29. The previous owner was Seritage SRC Finance.

The larger mall is 1 million square feet and counts Ikea and Target Corp. among its tenants. NewMark Merrill plans to stabilize the center.

Sigal said he got a good deal on the property, and its tenants were performing well, even during the Covid-19 pandemic.

“We are long-term believers that people like the social experience of going outside and shopping,” Sigal said.

The company is looking to acquire more retail centers, particularly in areas without a lot of other retail and where residents want NewMark Merrill in the neighborhood.
“For us, it all starts with the community,” Sigal said. “We want communities that want us to be there.”

Sigal likes a tenant mix that allows the shopping area to be “the center of the community.” He also wants centers that “complement online shopping” and have daily needs tenants such as grocery stores, pharmacies and gyms.

In L.A., Sigal is a fan of areas like Carson and Inglewood. He tends to avoid neighborhoods that already have a heavy retail presence.

Sigal said a big part of his job is “getting through the next five to six months.”

He’s hoping PPP is expanded so tenants can get extra money to stay afloat, and he’s working to understand county and state regulations where NewMark has properties, so the company help tenants be successful.

“In times of crisis, it’s easy to look inward,” he said. “We have to remember that there are a lot of people that depend on us to help them survive, and that includes our small businesses.”

Mid-Wilshire-based CIM Group has generated plenty of headlines in the past year, but not all of them were for wins.

In June, the company backed out of a deal worth an estimated $100 million to purchase Baldwin Hills Crenshaw Plaza., an 869,000-square-foot retail center on 40 acres at 3650 W. Martin Luther King Jr. Blvd.

CIM Group’s plan to redevelop the mall met with opposition from the community, which also alleged that the company had ties to President Donald Trump and his son-in-law Jared Kushner.

The company disputed the allegation, saying in a statement it “would have enjoyed the opportunity to work with the community and make Baldwin Hills Crenshaw Plaza successful for Crenshaw and South L.A. It is unfortunate that a petition by opponents to our acquisition of the property relied on false statements rather than comparing and contrasting a prior development proposal and CIM’s current vision for the property.”
The company enjoyed better outcomes with other deals, including an April transaction to sell Inglewood Plaza for $29 million to Stonehill Capital, Downtown Holdings and Urban Center Holdings. The 98,000-square-foot retail center has three buildings.
CIM Group has been active in other asset classes as well. In September, the company purchased a 2,346-unit apartment property in Alexandria, Va., for $506 million.

The transaction was the highest-priced multifamily deal ever in the Washington, D.C., area, according to CoStar Group Inc. The property, dubbed the Southern Towers, has five 16-story buildings and almost 2 million square feet of space.

In March, CIM Group sold a multifamily site and an adjacent collection of 37 apartments in West Los Angeles. The 147-unit Elevate at 1515 S. Granville Ave., which was included in the sale, was built in 2019.

Rick Caruso has become one of the wealthiest developers in Los Angeles, largely because of his successful high-end retail properties.

His company, Caruso, has built shopping centers, including The Grove, The Americana at Brand and Palisades Village.

The Grove is one of the best-known shopping centers in L.A., complete with a large fountain, outdoor events and stores. Its 600,000 square feet are 100% leased, and the company said it’s the second-most productive shopping center in the United States.

The residential portion of the development has 242 apartments and 100 condos on top of the retailers. The apartments are 100% occupied.

Most of Caruso’s properties are 100% leased, or close to it, according to the company’s website.

Despite the Covid-19 pandemic’s impact on retail, Caruso is still doing well.

He ranked No. 11 on the Business Journal’s most recent list of Wealthiest Angelenos, with a net worth of $5.8 million, up 2% from the previous year’s $5.7 billion. His portfolio only carries a small amount of debt relative to other retail developers.

And Caruso has developed more than just retail. Last year, he opened the Rosewood Miramar Beach hotel, his first resort project, in Montecito. The hotel has 161 rooms, in addition to seven restaurants and bars.

Caruso is also behind an 87-unit luxury apartment building at 8500 Burton Way in Beverly Grove. The eight-story complex has a rooftop deck with a zero-edge pool. The ground level houses a Trader Joe’s.

Beyond his real estate empire, Caruso is the chair of USC’s board of trustees, chairman at Loyola High School, is a member of Pepperdine School of Law’s board, and sits on the boards of Irvine Co., Providence St. John’s Health Center and the Ronald Reagan Presidential Library Foundation.

Newmark Knight Frank is one of the most active brokerages in L.A.

The company was No. 3 on the Business Journal’s list of commercial brokerage firms, with $9.7 billion in L.A. County sales and lease deals in 2019.

Its L.A. operation works across all asset types, has roughly 100 brokers and is led by Phil Brodkin.

The Covid-19 pandemic has had an impact on Newmark Knight Frank, which reported second quarter revenue of $383.7 million, compared with $551.5 million during the same period in 2019.

“It’s been a long six months that is continuing to get longer and longer. When we left the offices on March 13, everybody expected it to be a short period of time and wasn’t expecting it to be this long,” Brodkin said.

At first, many investors outside of the industrial real estate market were taking a wait-and-see approach, he said.

“There’s no data to help companies and brokers make decisions,” Brodkin said.
As a result, he added, many Newmark Knight Frank brokers did a lot of consulting as people turned to them for advice.

“All of our brokers took on more of an advisory role because deals weren’t getting done and because it was an opportunity to say to our clients, ‘We are going to take this ride with you and help in any way we can,’” Brodkin said.

For the rest of 2020, Brodkin said, he expects some difficulties, but he believes that capital market deals will start to close.

Luchs, a vice chairman at Newmark Knight Frank, and his team did more than $325 million and 500,000 square feet in retail transactions in 2019.

Some of his biggest deals last year were the Melrose Place Collection at 8436-8552 Melrose Place, which sold for nearly $48 million, and the Brooks Brothers lease of 7,800 square feet at 425 N. Canon Drive in Beverly Hills.

Luchs focuses on international fashion brands looking for store locations and is a big player in Beverly Hills, especially on Rodeo Drive and in the Westside, Malibu and Hollywood.

Brodkin said Luchs and some other top NKF retail brokers have spent time “being a mediator between tenants and landlords.”

Landlords, he said, don’t accomplish much now if tenants leave as the landlords will have a hard time filling the space. But, he said, a few property owners have “taken some space and filled some space and are taking advantage of an opportunity.”
People like Newmark Knight Frank Vice Chairman Bill Bauman have advised landlords on conversions, Brodkin said.

There has also been some collaboration between industrial and retail teams to figure out how to reuse retail locations where businesses haven’t survived, including potentially converting some into warehouses.