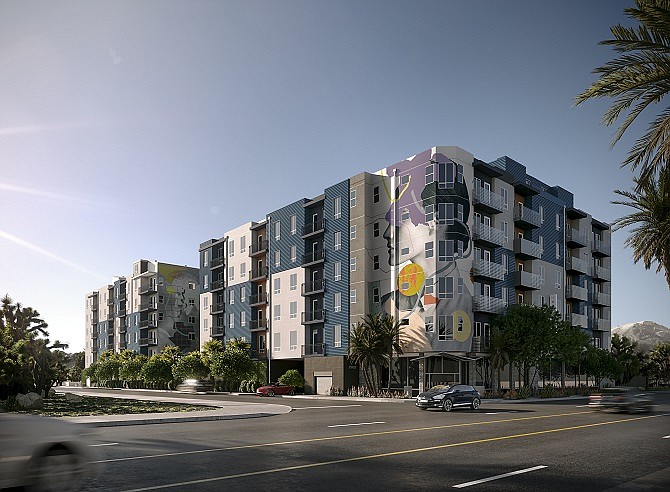 Cityview owns and operates 5,000 residential units and has 1,000 units worth $500 million in the pipeline.

In Koreatown, the big name in development is Jamison.

The family-run company was founded by physician David Lee as a side business in 1995. Today, it’s a full-time endeavor managed by his children, Jaime, Garrett and Phillip Lee.

Once known for owning Class B office properties, the company has since expanded into developing multifamily properties.

Jamison has developed more than 2,000 units. It has opened 336 so far this year and expects another 1,000 units to come online by year-end.

Jaime Lee said the last few months had been “slow,” but “it’s steady, and there’s a lot of interest in new projects.”

The company’s most recent opening was the Crosby North project in September, where roughly 50 leases were signed in three weeks.

On the office side, Lee said, things had been “slow but steady,” adding that some tenants who need to grow are signing leases and expanding now.

“Our focus is to be primed for the rebound with ready-to-go spec suites and improvements,” Lee said.

She added that some nightlife tenants are looking at leases as well. These projects can take a year from signing to opening, and owners want to be ready once nightlife comes back.

“It’s not quite as many deliveries as this year, although we are still expecting one of the buildings for the end of this year might push into early 2021, so we still have seven buildings completing next year. It’s been a pretty steady pace since we started,” she said.

And the company is looking to deliver more units to market.

Lee said projects take four to five years from start to finish, so developments that are opening now were underway long before Covid-19.

As workers return to offices, Lee said she believes there will be a spike in residential occupancy near employment centers like Koreatown.

“We think there will be a mass migration back to cities, especially cities like L.A. that are not a dense metropolises,” she said.

Century City-based Cityview is one of the most active developers in Los Angeles.
The company ranked No. 3 on the Business Journal’s most recent list of commercial real estate developers in L.A., where it has developed 6.5 million square feet across 75 projects since 2010.

Cityview owns and operates 5,000 residential units and has 1,000 units worth $500 million in the pipeline, according to Chief Executive Sean Burton.

Despite Covid-19, Burton said business has been strong.

“Things have been going well, all things considered,” he said. “It’s been a crazy few months. We’ve been pleasantly surprised by people’s willingness and ability to pay rent. We’ve been happy with the virtual leasing efforts.”

Burton said the company’s occupancy numbers are not quite where they were pre-
pandemic, but virtual leasing efforts have been fairly successful. Lease retention, meanwhile, is 10% to 20% higher than pre-Covid levels at Cityview properties.

The company has opened outdoor amenities at its properties, Burton said. Indoor amenities vary based on the jurisdiction’s ordinances.

“We’ve made lots of changes as far as limiting the capacity of places,” he said, adding that Cityview is making sure people are wearing masks, that areas are kept clean and that people are distancing.

Burton said the level of leasing and tenant retention has made the company interested in new projects.

While new deals are happening, Burton added, they’re not occurring at the same pace as in previous years because of Covid-19, the upcoming presidential election and propositions on the November ballot.

Burton said the company is not currently looking to sell properties despite being involved in a few large sales last year. In December, Cityview sold an equity stake in The Pearl on Wilshire in Koreatown, which valued the property at nearly $171 million.
The Pearl on Wilshire, at 687 S. Hobart Blvd., is a 346-unit property that opened in 2018.

Cityview had also sold the 174-unit Mira at the Warner Center for $70.5 million.
“We are generally not selling properties,” Burton said, the exception being two that had contracts fall out during Covid as buyers lost financing.

The company, which is the majority owner of more than $800 million worth of real estate, focuses on apartments and student housing.

MJW’s local multifamily properties include the Federal Apartments in West Los Angeles, the Koreatown Collection, and the Oxnard Plaza Apartments in North Hollywood.

In March, the company created a $500 million fund to invest in value-add multifamily and student housing properties, joint ventures, distressed debt and note sales that could lead to ownership opportunities down the road. The fund was initially expected to reach $300 million but was expanded due to demand.

The company has also been adding to its portfolio.

He said the company was about to close on a handful of deals and a project that would convert a hotel to student housing. Many of its other assets are multifamily.
“We’re not doing as much student housing,” Weinstein said. “We’re doing more regular multifamily nationally. We have a lot of rehabs going on right now.”

For some of the renovations, Weinstein said, the company is “toning it down a little bit” and spending less on upgrades. “It doesn’t pay to spend the extra money right now,” he added.

Weinstein said MJW is doing a lot of work beyond its L.A. base.

“The reason we haven’t bought more in Los Angeles is the laws are very poor for landlords,” he said. “It’s become difficult to know what your cash flow is going to be.”
He said rents have gone down 10% to 15% at some of his properties, that not everyone is paying and that vacancy is higher than before. Those elements, he added, amount to “a lot of lost income.”

According to Weinstein, “laws are more generous to owners” in other parts of the country. “We think we have to wait a while and see what happens with the laws in California and if we want to buy in Los Angeles,” he said.

Looking ahead, MJW plans to close a handful of deals this year in areas including Reno, Nev.; Omaha, Neb.; and Colorado.

Downtown-based CBRE Group Inc. is not only the top-ranked commercial brokerage in Los Angeles, according to the Business Journal’s latest list, it’s also one of the largest brokerages in the world.

CBRE has 345 commercial brokers in L.A., led by Chief Executive Robert Sulentic.
Even with its size advantage, though, CBRE Vice Chairman Todd Doney said “activity was dramatically slowed down by Covid.”

Business in the second quarter dropped to one-third of year-earlier levels, Doney said, but he expects activity in the third quarter to be about 47% compared to the same period the previous year.

“We’re starting to see the markets improving from where they were at a standstill in April and May,” adding that he has recently closed large deals.

CBRE is active across all asset types, including multifamily.

“The industrial product and multifamily product have held up fairly well during Covid,” Doney said. “It’s the retail sector and the hotel sector that have been battered the most. Office is somewhere in between.

One aspect to watch, according to Doney, is the possibility that more retail products will be converted for other uses.

He said more retail centers could be converted into industrial or office space or have mixed-use projects with a multifamily component built on the land.

“What I hear from the multifamily people is, despite the new units getting added to L.A., the demand is there for it,” Doney said.

He added that he does not feel the broker’s role has changed due to Covid-19 and that they always had to consult with clients.

The company, though, is working on getting as much information to its brokers and clients as possible.

“It’s like drinking from a fire hose within the company right now. We are putting out so much information to everybody and every service line. It’s terrific. There’s a lot of data right now. Our clients are just thirsty for information,” Doney said.