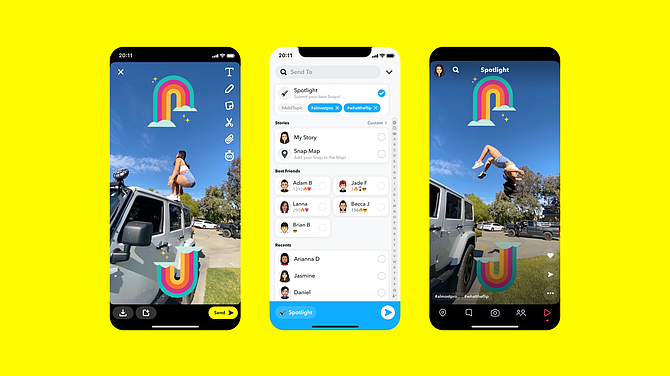 Snap will pay makers of popular videos in its Spotlight platform.

Snap Inc. has added a new feature that puts the company squarely in competition with TikTok.

Snap rolled out a new feature for its Snapchat app on Nov. 23 that will showcase user-made videos and provide financial rewards for creators of viral content.

The new platform, called Spotlight, gathers popular short videos from around the social media app and presents them to users based on their video viewing history and preferences.

The Santa Monica-based social media and instant messaging company also announced that it will pay out more than $1 million per day to creators of the most popular Spotlight videos, based on an internal ranking system that tallies how many unique views each video gets.

The Spotlight feature echoes popular functionality of rival TikTok, which is owned by Beijing-based ByteDance Ltd.

TikTok has attracted close to 1 billion monthly users with a platform that allows users to record and share short videos.

Snapchat users have long had the option to share videos with others, but the Spotlight feature makes it possible for those clips to find a broader audience.

Snap added TikTok to its list of competitors in 2019 Securities and Exchange Commission filings, but Chief Executive Evan Spiegel also described the app as a “friend” and “partner” in an earnings call with investors last year, emphasizing differences between TikTok and Snapchat, with the latter more focused on “communication with real friends.”

On Nov. 19, Business Insider reported that Snap had acquired London-based software developer Voisey Entertainment Ltd. for an undisclosed price. Company filings show Voisey changed its address to that of Snap’s London office in October and named Snap’s general counsel and international controller to its board of directors.

Prior to its acquisition, Voisey had developed an app with an interface similar to TikTok. The platform allows users to create short music videos, assisted by vocal effects and a library of audio tracks that can be stitched together.

Representatives from Snap and Voisey did not respond to a request for comment on the deal.

Snap, like TikTok, has seen a surge in user growth during the pandemic. The company reported nearly 250 million daily users in its latest quarterly earnings report, up 18% from the same period a year earlier.

The number of snaps, or photos and videos generated by users, jumped 25% over the same period.

In the past, snaps have generally been shared within a user’s network of friends, but the Spotlight feature allows users with private profiles to choose whether to make specific videos public. The company says it will moderate Spotlight content to ensure it abides by community standards.

In an October call with investors, Spiegel said “foundational investments” the company had made in its design and features contributed to its growth. He suggested the company would continue to build in new features for Snapchat users, including added gaming options and augmented reality platforms like its signature Lens feature.