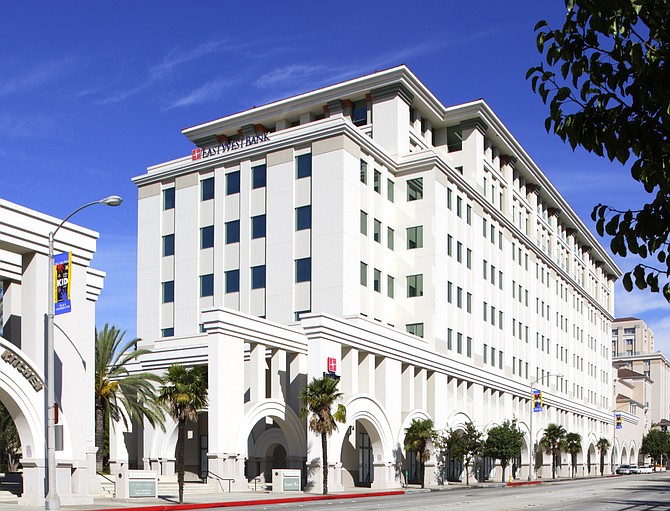 Local banks have yet to feel the financial squeeze the coronavirus pandemic has put on other industries. First-quarter earnings, however, suggest they are bracing for a potential impact in the months ahead.

East West Bancorp Inc., PacWest Bancorp, Preferred Bank, Cathay General Bancorp and Hope Bancorp Inc. all reported earnings down year-over-year in the first three months of 2020. While loans and deposits actually grew at many of the banks, the disappointing first-quarter results were driven largely by higher provisions for credit losses.

The provisions refer to money set aside to cover costs associated with uncollected debt and debt payments. Banks increase these provisions when they anticipate a greater likelihood of default and nonpayments in the near future.

East West, the largest of the local public banks, recorded provisions for credit losses of $73.9 million in the first quarter, up from $18.6 million one quarter before. It directly attributed these to “the deteriorating macroeconomic conditions and outlook as a result of the Covid-19 pandemic” in its earnings report.

The size of banks’ provisions depended in part on their exposure to sectors most deeply impacted by the Covid-19 lockdowns.

This was one key factor in PacWest’s large allocation, according to David Chiaverini, an analyst with Wedbush Securities Inc. who covers several of the local banks.

Roughly $2.9 billion of PacWest’s $19.7 billion total loans outstanding are in construction and land.

“In any downturn, construction is always a higher-risk area because the owners of the buildings, no matter what (type of properties) they are, typically have to get it leased up or sold after it is built,” Chiaverini said. “In a down economy, they might not get either the rent or sale price they are looking for.”

PacWest also has $1.1 billion in hotel loans outstanding, as well as several hundred million dollars’ worth of loans in the aviation, restaurant and oil services sectors.

“When adding it all up,” said Chiaverini, “they do shake out near the higher end of exposure to areas that tend to get hit harder in downturns.”

East West, by contrast, had relatively limited exposure to areas most impacted by the Covid-19 pandemic. According to the bank, less than 1.5% of its loan portfolio was in travel, hospitality and restaurants combined. Oil and gas were the Pasadena-based bank’s largest high-risk exposure areas, comprising approximately 4% of total loans.

The banks’ relative leap in provisions for credit losses were not solely the result of Covid-driven economic concerns. New regulatory changes also played a role.

At the start of this year, new accounting standards, dubbed Current Expected Credit Losses, or CECL, came into effect. The new rules, originally announced in 2016, effectively require banks to bolster their reserve levels in anticipation of predicted losses. Under the previous rules, banks did not need to record bad loans until it was probable that a loss had actually occurred.

“It’s kind of a double-whammy,” Chiaverini said. “Not only is the pandemic causing the risk to increase, but now CECL has just been implemented.”

He said banks would have likely increased credit loss provisions in the first quarter even without the new rules, but to a lesser degree.

Although the updated standards could help banks be better prepared for economic crises like that caused by Covid-19, they also increase volatility.

“There is a procyclical aspect to it,” said Gary Tenner, a managing director and analyst with D.A. Davidson & Co. “Under the older rules, it would have been a slower ramp up (of reserves).”

Under the Coronavirus Aid, Relief and Economic Security, or CARES, Act, banks could choose to defer adoption of the new rules. The vast majority of institutions, however, chose to implement the more proactive accounting standards in the first quarter.

“If you do defer, you would still have to restate your financial results to the first quarter of this year” once the pandemic is over, said Tenner. “Since most of the banks had had so long to prepare, they decided to push ahead with it.”

Cathay was one of the only local public banks to take the CARES deferral. On an earnings call, Cathay Chief Financial Officer Heng Chen, said his bank decided to delay after concluding immediate implementation of the new standards would result in overstated reserve needs.

Banks are likely to continue adding new loan loss provisions in the months ahead, according to Tenner. “If there is a v-shaped recovery, there will probably be more provisioning in the second quarter and then less after that,” he said. “If the recovery is slower, you could anticipate provisioning remaining at high levels for the rest of this year.”

At present, most of the drops in bank earnings have been driven by anticipated losses. If cities remain shut down in the months ahead, many of these are likely to become realized defaults and direct drains on bank balance sheets.

“Most banks are providing their borrowers a minimum of 60 to 90 days forbearance,” said Wedbush’s Chiaverini. “Past six months is where things are going to start getting dicey if these lockdowns are still in effect.”