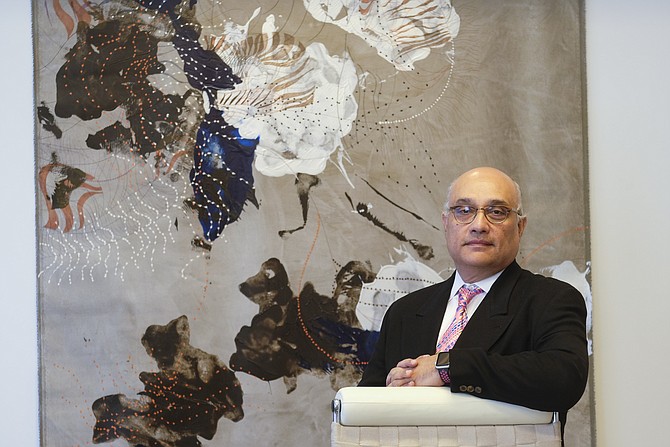 Noor Menai sits at the intersection of Los Angeles and Asian business.

As the U.S. head of one of Taiwan’s largest banks, Menai has unique insight into the local economic impact of major events like the trade war and the coronavirus outbreak.

The chief executive of downtown-based CTBC Bank Corp. (USA), Menai was born and raised in Pakistan. He spent his career traveling the world before arriving in Los Angeles just under eight years ago.

Menai got his start working in IT at a bank that was later acquired by JPMorgan Chase & Co. He went on to hold a range of positions, including CEO of Charles Schwab Corp.’s San Francisco-based bank, and managing director of a Middle Eastern sovereign wealth fund.

Menai’s business, steeped in international investment and commerce, exists in a space deeply affected by recent U.S.-China tensions. Despite the circumstances, the CEO is sanguine about prospects for Los Angeles businesses and opportunities in an increasingly turbulent global environment.

Drinking from the firehose

Menai says, however, that these numbers can be misleading. “There was a peak,” he said, “but because that was like drinking from a firehose, it is still a very substantial inflow.”

Then, in 2017, a Chinese government crackdown on these megaprojects choked off a huge swath of investment funds. Chinese conglomerates like Wanda were pressured to divest a range of overseas investments — especially those with little relation to their historical lines of business.

“There was a proper response from the Chinese government to say, ‘Guys, pick a lane,’” Menai said.

While some high-profile projects were deeply impacted by the new policies — such as Wanda’s $420 million sell-off of a flagship Beverly Hills property in 2018 — Menai says large portions of the U.S.-China investment space were unaffected.

“We actually haven’t seen much let-up in demand for investment in the residential (real estate) side,” he said.

Individual Chinese citizens, according to Menai, have still found ways to keep up purchases in the Los Angeles property space, despite the crackdown on capital outflows from Beijing.

“Chinese investment in residential is like water,” Menai said. “It will find a way.”

The majority of U.S.-China business was also unaffected by Beijing’s investment policies, according to Menai.

“If you cross out those big hotel projects which were distorting the total investment numbers, and you just look at the middle-market,” he said, “the bread and butter of supply chains was largely untouched.”

Menai raised the example of Gardena-

based Tireco Inc. “If they are getting tires manufactured in Asia, it’s a substantial business, but it’s not in the Fortune 10, they’re not General Motors,” he said. “Those things worked unabated.”

It took two phenomena, one systemic and one political, to finally shake these long-standing supply chains.

In the years leading up to the U.S.-China trade war, American manufacturers were already looking to diversify supply chains away from China.

“It was more of a macroeconomic consideration,” Menai said, “The cost of production in China is going up, so where is the next China?”

Companies had been exploring alternatives, such as Vietnam, for some time, according to Menai, when the trade war hit.

“Then companies were thinking, ‘Well, now if it’s politically unpopular for me to be manufacturing in that part of the world, what are my alternatives?’” he asked.

Rather than presenting a threat, Menai said these shifts in global supply chains offered unique opportunities for his bank.

“We own the entire Pacific Rim,” he said. “We’re in Malaysia, we’re in Hong Kong, we’re in Japan, we’re in Taiwan, we’re in China and we’re in North America.

“We can look and say, ‘Tariffs are going to hit. They are gonna hit this sector and here’s the trickle-down effect on you.”

According to Menai, CTBC’s on-the-ground understanding of both North American and Asia Pacific markets leaves the bank well positioned to help companies redesign their supply chains.

“We could go from factoring your loads and your inventory in any one of these countries,” he said, “all the way to being your partner as you strategically shift some of your manufacturing from country A to country B.”

Yet, even an optimist like Menai is watching some news with a wary eye.

Panic over Covid-19, the disease caused by the coronavirus, has roiled global markets. All three major U.S. stock market indexes plunged into bear market territory on March 12 as investors reeled over President Trump’s announcement of a coronavirus-driven, 30-day ban on most travel from Europe. It was the Dow Jones Industrial Average’s worst day since the 1987 Black Monday crash.

Menai said banks like his were relatively well equipped to face the spread of the virus.

These policies, part of a bank’s standard business continuity planning, are mandated by regulators to ensure that the country’s economic infrastructure doesn’t collapse in the event of a crisis.

“We’re the guys who are double-knotting our shoelaces, and wearing belts and suspenders because our job is to be conservative,” he said.

The CEO conceded, however, that all this planning could only go so far in the event of a pandemic.

“We’re not insulated from what happens to the U.S. economy,” he said. “We have a diversified business model, but things still tend to go down when the economy goes down.”