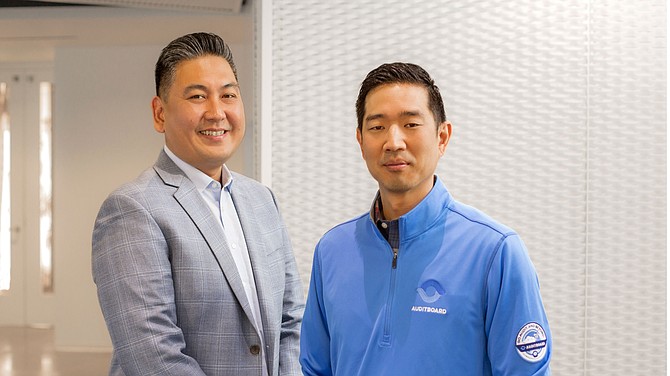 Auditboard Inc. has quietly built one of the country’s fastest-growing businesses in a sector famously unwilling to move fast and break things.

The Cerritos-based business, which sells compliance software intended to streamline audit processes, was the third fastest-growing technology company in the United States last year, according to Deloitte.

The consulting and audit giant estimated that Auditboard’s annual revenue grew nearly 16,700% from 2015-2018.

Auditboard said it has more than 600 clients, including brands such as Walmart Inc., Intel Corp., Electronic Arts Inc., and Santa Monica-based mainstays Cornerstone On- Demand Inc. and Activision Blizzard Inc.

While the company’s products don’t revolutionize the fundamentals of audit, co-founder Daniel Kim said there is a profound difference in user experience.

“This is kind of like going from a Blackberry to an iPhone,” Kim said. “We’ve had auditors look at our software and literally say, ‘Wow, this is like the Apple of audit software.’”

According to Kim, the platform provides an organizationwide view into a business’ risk profile. These features, he said, allow companies to better manage risk while lowering the manpower required to do so.

Kim co-founded Auditboard with childhood friend Jay Lee. They grew up in Cerritos and started their careers as auditors at PricewaterhouseCoopers and Ernst & Young Global Ltd., respectively.

Kim, meanwhile, continued in audit for more than a decade. He served as the global head of audit for two public companies before, he said, annoyance with the industry’s lack of technological progress sparked the idea for Auditboard.

“The entire industry runs on manual spreadsheets and programs,” he said. “The lack of innovation was so frustrating.”

One night over beers at Lee’s house, Kim said, the two decided to build a company that could solve that problem.

“Admittedly, five years ago, it was very challenging,” he said.

Although Kim and Lee were confident in their vision, selling the relatively unflashy idea of redesigned audit software to venture capital firms was initially difficult.

Persistence paid off, however, and the two eventually found investors who believed in their new venture’s potential.

“I thought that compliance software made a lot of sense,” said Eric Manlunas, founder and managing partner at Wavemaker Partners. “It seemed like a sensible, streamlined way to ease the pain of audit.”

Manlunas’ Santa Monica-based venture capital firm was an early investor in Auditboard. He said that the founders’ grounded vision, personal expertise in the field and focus on profitability all helped sell him on the fledgling company.

“Predictable recurring revenue is very sexy to me,” he said.

The founders said the key to Auditboard’s success was building the platform from the bottom up.

First, “they built their entire platforms targeted at the CFO or executive suite,” he said, “not for the person doing the day-to-day entries.”

This, according to Kim, led to unintuitive systems that rank-and-file auditors did their best to avoid using — returning instead to relatively low-tech alternatives, such as Microsoft Excel.

Second, many of these companies attempted to field teams of technologists to design their audit software. They based designs on user interviews with auditors, rather than personal experience.

The field’s highly technical nature, according to Kim, meant that systems designed in this way usually ended up being out of step with the practical realities of daily audit work.

“We built our entire company around teams of former auditors,” Kim said. “That’s the core of our business: by auditors for auditors.”

Since its founding, Auditboard’s team has grown from two to about 250 employees. The company opened an additional office in El Segundo in 2018, a Toronto location in mid-2019 and recently upsized into a larger Cerritos headquarters.

The founders said they intend to grow Auditboard’s international client base over the next year. Currently, about 10% of the company’s clients are based outside the United States.