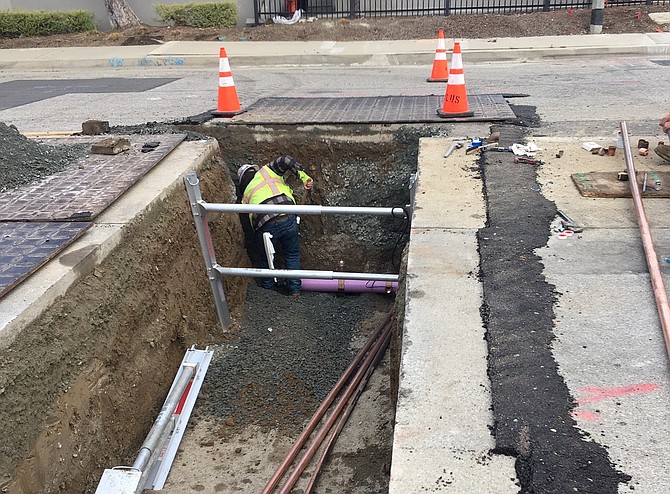 The completed pipeline in Torrance will save 1 million gallons of drinking water per year.

The pipeline will use water from the district’s water recycling facility in El Segundo instead of drinking water to irrigate the landscape surrounding three new buildings, according to the June 11 announcement.

It is expected to save about 1 million gallons of drinking water per year, enough to supply the water needs of about 10 households annually.

Sares Regis paid for the pipeline, though the cost was not disclosed.

Newport Beach-based Sares Regis purchased the 110-acre site from Toyota in 2017 for a reported $270 million.

“Our organization invested in a recycled water distribution pipeline to create value and build a sustainable environment that uses water more efficiently,” Patrick Russell, senior vice president of development for Sares Regis, said in the announcement.

The Torrance Commerce Center is the 56th site in Torrance to be connected with recycled water since the recycling facility came online in 1995, according to the water district.

That plant, known as the Edward C. Little Water Recycling Facility, produces about 40 million gallons of water every day, conserving enough drinking water to meet the needs of 80,000 households for a year.

The facility also houses a 60,000-square-foot solar power generating system that the district says has reduced emissions of carbon dioxide by more than 356 tons in one year’s time.

The water recycling facility was built in response to the drought of the early 1990s. The West Basin district has invested about $600 million since then in its water recycling program — a figure that includes design and construction of the facility and a series of upgrades. That cost has been offset with about $275 million in government grants and other outside investments.

Some of the water is also used to recharge groundwater supplies, but none is used for drinking or personal hygiene purposes.