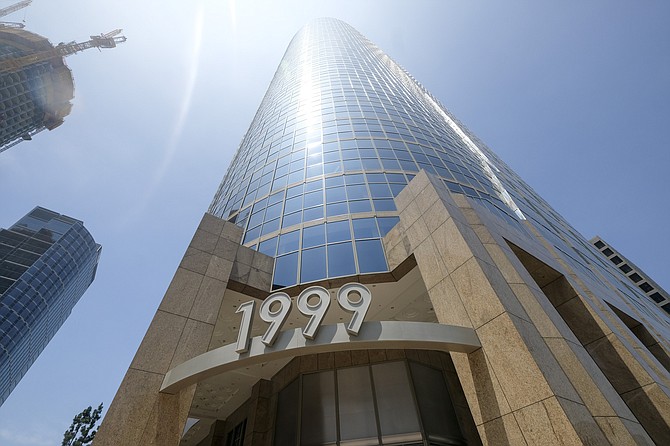 Senior Partner Louis Miller said working from home with Zoom during the lockdown has Miller Barondess reconsidering its lease of almost an entire floor at 1999 Avenue of the Stars in Century City. Photo by Ringo Chiu.

Louis “Skip” Miller starts his weekday mornings during the pandemic dressed in sweats and sitting at a different kind of desk.

“I don’t think my wife is thrilled that I’ve taken over the kitchen table,” he said, “but it’s worked well.” 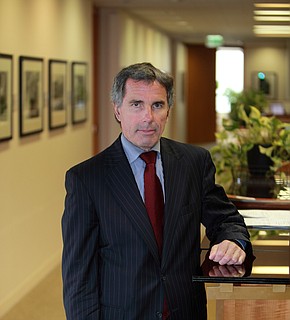 One of the leading litigators in Los Angeles, Miller is the senior partner at Miller Barondess.

He has exchanged a commanding view from a glass tower in Century City for a Pacific Ocean vista from his Pacific Palisades home.

There he conducts videoconferences with clients, colleagues, and courts; emails his secretary in the Century City office; and communicates with his office manager.

With no commute, Miller has an extra hour each day to work. And during lunch, he can slip down to the extensively equipped gym in his basement.

“Even after our office opens up,” Miller said, “I’m going to make it optional. (The firm’s attorneys) don’t have to come in if they don't want to. As long as they do the work, I don’t care where they are.”

Miller’s experience highlights the dramatic changes at Los Angeles law firms in less than three months — a response to the Covid-19 quarantine and emerging technology.

“I am definitely hearing a fair amount from folks how the Covid crisis is transforming the practice of law,” said Ona Alston Dosunmu, chief executive and executive director of the California Lawyers Association. “I anticipate the changes are going to be pretty far reaching and long lasting.”

Scott Cummings, who has studied law firm economics as UCLA’s Robert Henigson professor of legal ethics, said the moves have been a revelation. “It constitutes a sea change in the way law firms will operate going forward. We’re not going to go back from here,” he said.

The percentage of lawyers nationally who said they have been negatively affected by working from home fell to 21% in late May, down from 36% in early April, according to surveys by Clio, a legal software company with an office in Santa Monica.

“How to Build a Virtual Law Firm (and Why You Should),” a Clio online seminar conducted May 12, qualified for continuing legal education credit.

Even more stunning for a profession rooted in precedent, 85% of legal professionals told Clio they’ve been using video calls much more than before the pandemic.

And their clients seem to like it. More than half of legal services consumers said they prefer videoconferencing to phone calls, according to Clio.

“It is inconceivable to think that three months ago, you would have gotten those sort of survey responses,” Cummings said. “Now, there really will be no turning back.”

Previously, he added, “lots of firms have been reluctant to embrace remote interaction on the theory that it would impoverish the quality of service provided.”

Dosunmu agreed. “Many firms had a traditional, old-school mindset about productivity and the importance of being physically present in an office,” she said. “I think the pandemic has demonstrated that both of those aren’t necessarily true.”

Remote work also aligns with firms’ cost-cutting efforts, a paramount concern for the last 25 years, Cummings explained. “In that context, it’s a transformative moment,” he said. “I don’t want to understate that.”

The biggest cost of practicing law after salaries is office space, especially for firms based downtown and in Century City.

Miller said Zoom and his time at home have his firm reconsidering its lease of 20,000 square feet, almost an entire floor, at 1999 Avenue of the Stars in Century City.

“This is the conversation that every law firm has been having,” said Jeffrey Rosenfeld, a partner in downtown-based Alston & Bird.

“It was seen by many law firms as taboo — you want people the in office,” he said, “(But) if you were on the fence before, the last nine weeks have demonstrated it can be done.”

Some managing partners have said, on condition of anonymity due to the sensitivity of the topic, Zoom and electronic document availability mean they’re also able to shed receptionists, file clerks and other support personnel, further reducing space needs.

Zoom’s recording feature means videographers for depositions and other proceedings are no longer always necessary, one managing partner said.

Remote work can also cut travel costs, benefiting both lawyers and their clients.

“When I was practicing law, clients generally didn’t blink about paying for travel costs,” Dosunmu recalled. But now, “I suspect that many in-house counsels, when they look at their outside counsel spend, will continue to take a hard look at reimbursement for travel costs.”

“I expect those who attempt to hold onto the old way of doing business will be met with demands, particularly on the part of younger people, to adapt to what we’ve learned during this pandemic,” Dosunmu said. 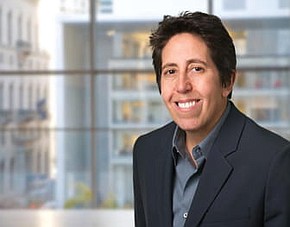 Jennifer Post, a managing partner in Thompson Coburn’s Century City office, agreed. “Why would you have a dichotomy with some members of the firms being able to be more productive where they roam, while you have others who are rooted to a physical place?”

Travel times and commute expenses are another factor for L.A. firms to consider, according to UCLA’s Cummings. “If there’s one big feature that differentiates Los Angeles from any other major legal market in the U.S., for sure, and maybe the world, it’s the … transaction costs of commuting … an even more salient reason to transition to some level of remote access,” he said.

Some see additional upsides to Zoom, GoToMeeting.com and the like.

For one, videoconferencing can facilitate collaboration between a firm’s offices in different locations, said Joshua Briones, a managing member of Mintz Levin Cohn Ferris Glovsky and Popeo’s Century City office.

“I think before you might be just inclined to handle things locally,” Briones said. “But now, there will be more familiarity with cooperating with others who are in other locations. It’s certainly easy to just click a button and talk to somebody and to see them. That’s nice.”

Videoconferencing can even take collaboration a step further by smoothing the way for law firm mergers, according to Andrew Raines, a founding partner of Raines Feldman in Century City.

“It kind of validates them,” he said. “We don’t necessarily have to assume to open an office with them. We can work virtually with them until it makes sense to open an office. So I think it’s going to facilitate and expedite these kind of mergers.”

Added Thompson Coburn’s Post, “There’s a lot of different ways to practice law, and now clearly the decision has been made that you have to be mobile in tech and nimble.”

When the pandemic hit, her firm expanded document-sharing technologies with clients, as well as WebEx access with both clients and the general business community.

Thompson Coburn also connected all back-office systems with the firms’ six offices around the country, expanded bandwidth and increased the number of remote users who could access all systems at all times.

In addition, the firm furnished employees with hardware to work from home and customized the gear for people with different technological skill levels.

“Are we going to continue to make those kinds of investments?” she asked. “The answer is yes.”

Not everyone has been persuaded, though. 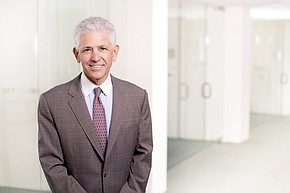 “I’m not looking forward to those changes,” said Daniel Petrocelli, chairman of O’Melveny & Myers’ trial practice. “I think the law profession and its clients are served vastly better when people talk to one another in one room,” he said.

Petrocelli, who is perhaps best known for winning a civil verdict against O.J. Simpson in the deaths of Nicole Brown Simpson and Ronald Goldman, said trials can be conducted remotely, but he doesn’t necessarily believe that’s the best course of action.

“(Remote trials are) not impactful,” he said. “Jurors interact with each other in the deliberation process. Lawyers interact with witnesses on the witness stand, sometimes in a very personal way, in a very confrontational way. … It can be lost if done remotely. It’s more difficult, and it’s not as much fun.”

“You can only go so far without the element of direct, face-to-face human interaction, in the law and in everything else in life,” he said.

Said the California Lawyers Association’s Dosunmu, “I … have some members who are a little more traditional and who value their role as an employer and like having a human support staff on hand.”

“(But) people who adapt to this are not going back. Those who resist adapting are only going to be able to hold out for so long,” she said.