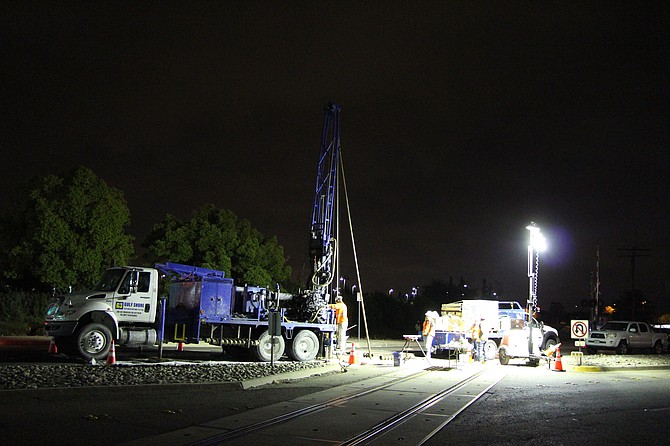 A crew takes soil samples in Glendora, where construction will begin in mid-July.

Major construction gets underway next month on the latest — and possibly final — segment of the Foothill Gold Line Extension light rail project.

The prime contractor joint venture team of Kiewit Infrastructure West Co. — a unit of Omaha, Neb.-based Kiewit Corp. — and Centreville, Va.-based Parsons Corp. is expected to start construction in July 10 on the 9-mile segment that will run from Glendora to Pomona.

The team has spent the last eight months on preconstruction work, such as relocating utilities.

“Construction teams will begin to mobilize in the Glendora office this month, and the first large operation is expected to start in mid-July at the Gladstone Avenue grade crossing in San Dimas,” Foothill Gold Line Construction Authority Chief Executive Habib Balian said in an email to stakeholders earlier this month.

Kiewit-Parsons is the same design-build team that led work on the two completed segments of the Foothill Gold Line — the first from downtown’s Union Station to Pasadena, and the second from Pasadena to the Azusa- Glendora border.

The $805 million extension from Glendora to Pomona was initially supposed to run 12 miles and end in Montclair in San Bernardino County.

But in late 2018, during a spike in overall construction labor and materials costs, bids came in substantially higher, at around $1.2 billion. So, the Foothill Gold Line Construction Authority overseeing the project took the unusual step of further segmenting this final portion.

In October, the authority signed a contract with the Kiewit-Parsons team for $1.19 billion, but with an $805 million “base scope” that included stations in Glendora, San Dimas, La Verne and Pomona.

The contract includes a $381 million “option” to continue the project to its original end target in Montclair — another three miles and two stations — but only if that additional money is secured by October 2021.

So far, that hasn’t occurred. If the deadline passes, the terminus of the Foothill Gold Line Extension is likely to be in Pomona, just east of the Los Angeles County Fairplex.

The Glendora-to-Pomona segment is anticipated to be completed in 2025; if the money is found to build out to Montclair, then the project would wrap up in 2028, the same year as the planned Summer Olympic and Paralympic Games in the Los Angeles area.

The construction phase was expected to create as many as 16,000 jobs and up to $2.6 billion in economic output for the eastern San Gabriel Valley region, according to a study conducted by Westchester-based Beacon Economics for the construction authority two years ago.

However, that was for the entire 12-mile extension to Montclair, not the 9-mile segment now under construction to Pomona. No economic impact study has been done for this smaller segment.

The decision to build only out to Pomona instead of Montclair — at least for now — has opened an unexpected nearby opportunity for another Los Angeles County construction company: billionaire Elon Musk’s Boring Co. in Hawthorne.

The authority’s board on June 3 approved an initial study of the proposal, setting aside other airport rail link alternatives, including a $1.5 billion light rail extension of the Gold Line from Pomona. The study is expected to be completed later this year.

Hagman earlier told the Business Journal that he only encouraged Boring Co. to make the proposal after the decision was made to temporarily end the Foothill Gold Line Extension in Pomona.