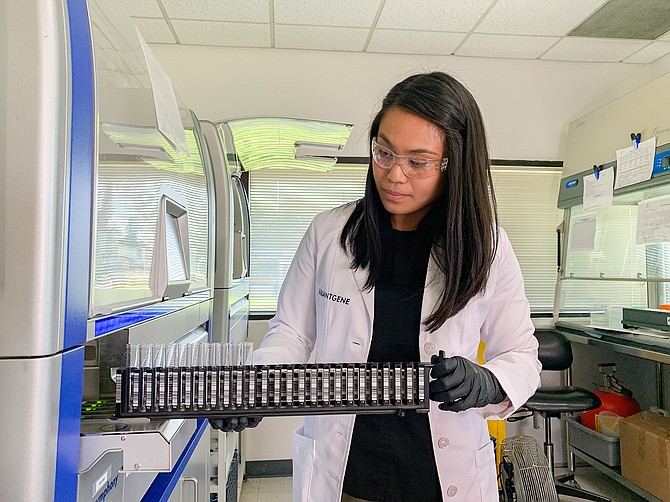 Quantgene has formed partnerships to expand its capabilities.

Santa Monica health tech startup Quantgene Inc. is one of dozens of companies racing to revolutionize cancer detection screening by using only a drop of blood instead of the intrusive biopsies prevalent today.

But with its technology to analyze DNA genetic mutations from blood samples now awaiting approval from the Food and Drug Administration and other federal agencies, Quantgene isn’t in idle mode.

Instead, the company has formed partnerships with two companies to provide ancillary services, including test analysis and genetic counseling for patients. And Quantgene is also pivoting to Covid-19 testing, using its artificial intelligence-based analytical techniques to provide services to businesses.

To help with all this and to eventually scale up its cancer detection screening technology, Quantgene in May secured a $6.4 million convertible note.

This series of developments has all happened in the last 90 days as the nation has been gripped by the Covid-19 pandemic.

The moves represent a significant broadening of focus for Quantgene, which Bhakdi and colleague Monika Hagen co-founded five years ago in a small lab at UC Berkeley.

As Quantgene has further developed the technology, its tests can now detect miniscule amounts of cancer cell mutations within the body much earlier than conventional biopsies taken of a mass of suspicious cells.

“This is the holy grail of cancer detection, and it uses the kind of technology that has only come about in the last five or six years as the artificial intelligence algorithms have improved enough,” said Ahmed Enany, chief executive of the Southern California Biomedical Council, a downtown-based industry association.

Enany said dozens of companies across the nation are in the hunt to develop so-called “liquid biopsies” that can detect cancer using only a drop of blood. The largest of these, he said, is Menlo Park-based Grail Inc., which was spun off four years ago from San Diego biotech firm Illumina Inc. Grail has raised nearly $2 billion in four rounds of financing.

Bhakdi and Hagen moved their lab to Santa Monica last year and continued developing their technology, focusing first on trying to detect early stage cancer. Eventually, the hope is to use the technology to detect other diseases with genetic components.

Bhakdi said the company submitted its cancer screening technology to the FDA and other federal agencies earlier this spring.

In normal times, approvals for screening technologies take roughly 90 days. But, with the crush of tests for Covid-19, federal agencies are backed up. Bhakdi said the company is now hoping for approvals in late summer or early fall, depending on how quickly the agencies can work through their backlogs.

In the meantime, Bhakdi said the company is using these extra months to broaden its focus.

“Cancer detection is an important pillar, but so is genetic testing, and we aim to offer both,” he said. “We’ve been looking at other genetic testing companies to see what is missing in their approaches that we can help fill in with our technology.”

With these relationships established, Quantgene has formed a direct-to-consumer business line called Serenity that Bhakdi said will offer subscription plans on two tiers: an entry-level service for genetic counseling and action plans to reduce cancer risk, and a more comprehensive service to gauge a patient’s risk for developing a broad range of diseases.

Bhakdi said the company hopes to have these programs fully operational by the end of this month with revenue starting to flow in during the third quarter.

Once the federal approvals come through, Bhakdi said, Quantgene plans to bundle these services around its core technology of liquid biopsy screening.

“They are looking for ways to generate revenue streams even before they develop their big gun of liquid biopsy,” said Enany of the Southern California Biomedical Council.

Quantgene is offering both antibody and polymerase chain reaction tests, sending out mobile testing units to business customers — at first in the entertainment and tech sectors, but eventually to all businesses.

The company promises a maximum turnaround time of 12 hours to email test results to businesses, meaning if a company signs up to test its employees, Quantgene can deliver results the next business day at a cost of less than $100 per test.

“What L.A. needs is a Covid testing solution that reduces risk and gets business going again,” Bhakdi said.