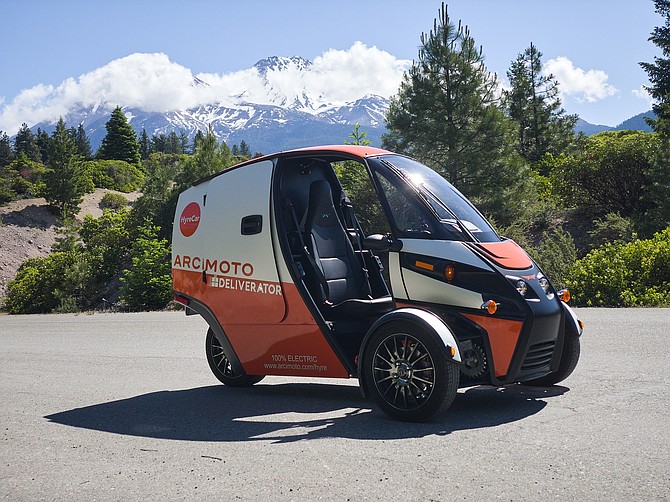 HyreCar has added Arcimoto’s Deliverator to its platform.

HyreCar Inc., the digital car-sharing marketplace, has set its first partnership with a car manufacturer.

Downtown-based HyreCar announced on June 22 that it has added Arcimoto Inc.’s Deliverator vehicle to its platform for rent in Los Angeles.

The Deliverator is a three-wheel, single- seat, electric vehicle produced by Eugene, Ore.-based Arcimoto, which said the vehicle is primarily designed for last-mile delivery.

HyreCar operates a digital marketplace that connects users that list cars for rent to people who want to drive for services such as delivery or ridesharing. It has traditionally worked with individual car owners and car dealerships.

The Deliverator can reach a top speed of 75 miles per hour with 500 pounds of carrying capacity and more than 20 cubic feet of cargo space, according to Arcimoto.

Joe Furnari, HyreCar’s chief executive, said the electric vehicle is attractive to delivery drivers because it saves them from spending on gas.

“The flexibility to maneuver in Los Angeles in normal traffic is also a huge benefit. If drivers are able to move quickly, they can make more deliveries and they make more money,” he said.

Furnari said HyreCar has seen a shift in demand during the pandemic, with more users seeking cars for delivery services and fewer users looking for cars to use for Uber and Lyft.

Currently, only two Deliverator vehicles are available on the platform, each renting for $20 daily. The price might change as the product is still in the pilot stage, according to Arcimoto Chief Executive Mark Frohnmayer.

Frohnmayer said Arcimoto has built more than 100 vehicles since it went into series production in September.

“We are in the very early stages of scaling the production of Arcimoto. Our goal is to scale up to the 17,000- to 20,000-unit range in the next 18-plus months,” Frohnmayer said.

“What HyreCar offers for Arcimoto is a chance for potential customers to try the vehicle before they buy it,” he added.