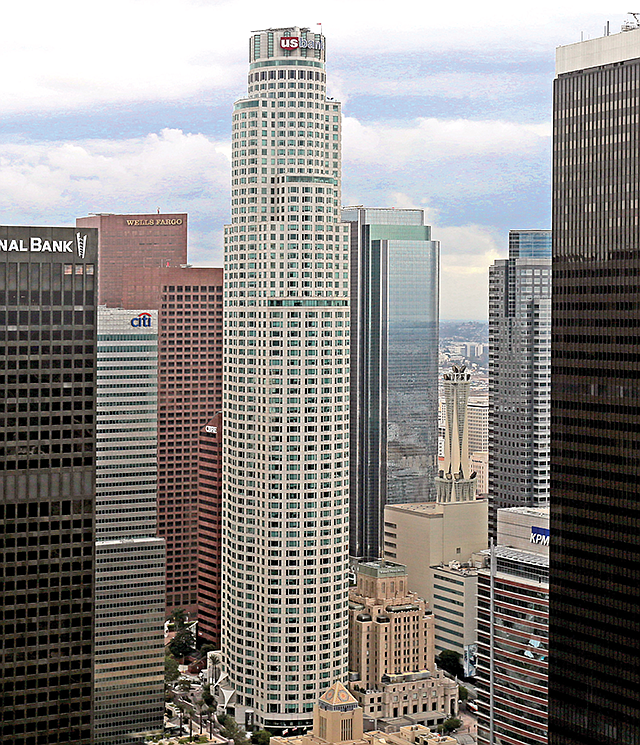 The building’s owner, Singapore-based OUE Ltd. plans to sell the property for $430 million. That’s up from the nearly $368 million the company paid for it in 2013.

It’s a significant discount, however, over what the price was expected to be.

When news broke last year that the tower would be sold, experts projected it could fetch $700 million.

The buyer for the deal, which has not yet closed, is New York-based Silverstein Properties Inc.

“We are excited to acquire the U.S. Bank Tower building in downtown Los Angeles,” Jeff Grasso, head of acquisitions for Silverstein Properties, said in a statement. “This is a unique opportunity to manage a trophy asset in a dynamic market.”

Experts say the price likely made the deal enticing.

“There are a few reasons why Silverstein got a great deal,” said Nick Griffin, the executive director at the Downtown Center Business Improvement District. “We were near the end of the cycle and then the pandemic set it in, and there’s a great deal of uncertainty. That’s when smart players make big moves.”

Michael Longo, a senior vice president at CBRE Group Inc. who was not involved with the sale, said that despite the uncertainty Covid-19 has brought to the real estate market, L.A. was still a good investment.

“Los Angeles as a market has a lot of great attributes, primarily the media and entertainment industries that analysts feel is going to be a driving factor and bounce back quickly,” he said.

He added that the new multifamily buildings and diversity of tenants in downtown makes it desirable.

And the price likely helped.

“If you can get a discount in this marketplace, investors are willing to invest in office (buildings),” Longo added. “What we have seen in other transactions is that there is a lot of money being raised for office investment, and most of it is value-add. If there’s a discount built in, there is not a lack of demand for those opportunities.”

He added that office sales are down about 80%, and he does not expect them to tick back up for the rest of the year as most owners hold. For buyers, he said, there will be a flight to quality “core assets.”

The U.S. Bank Tower is Silverstein’s first property in L.A. The company, which has 40 million square feet in its portfolio, is known for its trophy properties including the World Trade Center in New York.

Grasso said in a statement that the company was “looking at a number of other opportunities in the city and elsewhere on the West Coast,” as well as building a local team to expand the portfolio.

“They know what they’re doing and have the nerve and vision to do this deal,” Griffin said. “In a year or two or down the road, I think it’s going to look like a brilliant deal.”

U.S. Bank Tower, formerly known as the Library Tower, is at 633 W. 5th St. It has more than 70 stories and was the tallest building in L.A. until the Wilshire Grand was built in 2017.

The building has office space, restaurants and an observation deck on the 70th story with a glass slide.

It is currently 77% leased, according to data from CoStar Group Inc.

The sale is expected to close in September.