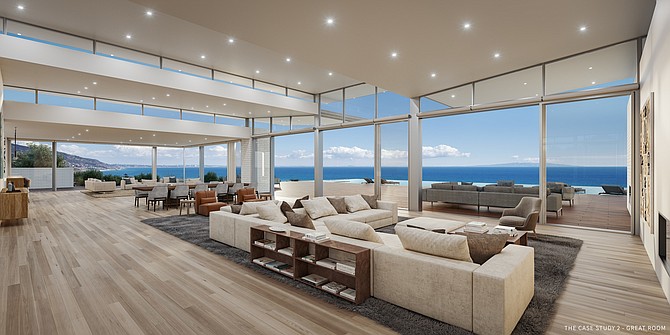 A rendering of Scott Gillen's $100 million spec home in Malibu.

Cannabis lounges. Karaoke rooms. Bowling alleys. BB gun ranges. An indoor basketball court with a floor that opens to a pool underneath.

These are just a few of the features Ramtin Ray Nosrati and his company, Sherman Oaks-based Huntington Estate Properties, have put into luxury spec homes over the years.

Spec homes, properties that are developed on a speculative basis without a specific buyer in mind, have long been a mainstay in L.A.

Nosrati’s properties, as well as those created by former stunt driver turned Malibu spec home developer Scott Gillen, are targeted at the ultra-rich with a plethora of amenities. Nile Niami’s The One, which listed for a whopping $500 million, falls into this category as well.

But spec homes are common at other price points, as well, and some industry experts feel there just aren’t enough at mid and low price points.

Jade Mills of Coldwell Banker Residential Brokerage — who ranked No. 8 on the Business Journal’s list of top agents in 2019 in L.A. by sales volume with $362 million in sales — said that a lot of spec builders aren’t building now.

“In a year or two, we are going to really need new homes,” she said. “The spec builders are a little worried about building, but this is the time they should start.”

Kofi Nartey, who left Compass to found Society Real Estate & Development in May, agreed that some developers have “stopped acquiring properties and are focused on finishing the properties they have” on the higher end. At more moderate price points, Nartey said, there has been more development and lots of demand.

“Demand has picked back up pretty quickly,” he said, adding that interest rates are still low, and Covid-19 has made people see the importance of owning homes.

Mills said some developers have had to take discounts on home sales, making them more cautious, but they’re starting to look forward.

“I’m getting a few more phone calls now on land,” Mills said. “They may be starting to feel the same way, that this may be a good time to start building, so they are ready to roll out in a year, a year and a half.”

“I sold a wireless company … and always had an eye for design, and once I got started in real estate, I wanted to do something different and unique and came up with indoor pools and basketball courts, and going after the rich and the famous in high-end areas and really building a house that you don’t have to leave,” Nosrati said. 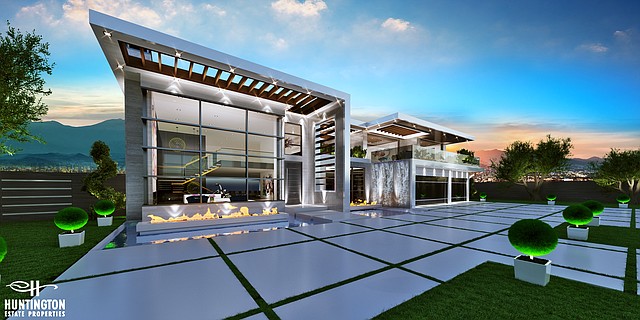 For many of his clients, there is no privacy outside the home, so Nosrati tries to make their home an oasis with any feature they could want.

That includes cannabis lounges, which “are like the new wine cellar.” The lounges have ventilated rooms, where homeowners can grow the plants, as well as plenty of areas to enjoy them.

“A lot of these clients that I deal with, their friends are at the same level. These guys can’t just go out in public and have a good time,” Nosrati said.

He added that some of his homes are purchased before completion by people seeking extra privacy.

Gillen, a stunt-driver turned director, bought a property in Venice while on a directing hiatus. He developed the site and, after deciding to move to Malibu, sold the Venice property in less than an hour.

Since then, Gillen has built roughly 30 spec homes, mainly in Malibu.

One of his biggest projects is what he calls the Malibu Series, a collection of high-end homes that include the $100 million Case No. 2.

Gillen said he likes developing spec homes over custom homes because of the freedom that comes with the work.

“I prefer to do what I do. If you like it, you can buy it. If you don’t, you can move out of the way and somebody else will buy it. It’s probably not the best business sense, but I’ve been in the situation where people like what I do,” he said.

“I prefer not to have clients. Clients can’t make up their mind” and make frequent design changes, he said.

The price tag for Gillen’s projects are nothing compared to spec homes like Niami’s The One. That project, a 100,000-square-foot Bel-Air home priced at $500 million will have 18 bedrooms.

But spec homes don’t always sell for the jaw-dropping prices they’re advertised at.

Take the Billionaire mansion, for example. The Bel-Air spec property built by Bruce Makowsky was initially listed for $250 million in 2017 but sold for $94 million two years later.

The home has 21 bathrooms, 12 bedrooms, a bowling alley and a helipad.

Makowsky also built a spec mansion in Beverly Hills, asking $85 million. It sold for $70 million in 2014.

“It’s not that they’re selling for an extreme discount. They are selling for what the market says it should be,” Nartey said. “The initial pricing is aspirational pricing, or a marketing tool to let you know that this is a great property.”

And Nosrati said some homes have trouble selling at high asking prices.

Mills added that, while prices often start high, the extent the of the price change also depends on other inventory in the market.

Some developers are working on spec homes at more moderate price points, but they still wouldn’t be considered cheap.

Carswell has brought a dozen projects to the market, including single-family homes and multifamily buildings. He has done spec homes priced from $600,000 to almost $15 million.

One of his most recent projects is 1580 Stone Canyon Road in Bel-Air, a six-bedroom home on the market for $14.5 million.

“It’s a beautiful property not far from the Hotel Bel-Air, which is why it spoke to me as a wise investment,” he said.

Carswell called homes in “platinum neighborhoods” — in the $10 million to $20 million range — “the most challenged right now.”

“There is a good amount of product. It’s plentiful, and construction is going on left and right. It’s chock thick in the Sunset Strip,” he said. “That neighborhood is hurt with the oversupply. Bel-Air is not to that degree. The one I have is the only one in the area.”

Jack Levine, managing partner of JB Real Estate Development has developed homes at a slightly lower price point. His current spec home project, at 1767 Sunset Ave. in Santa Monica, is listed at just under $6 million. He owns the project with partner Barney Stanfield and has worked on it with architect Joe Flynn.

Levine has been a contractor and developer in L.A. for more than 50 years and has done custom homes, spec homes and small condo developments. He also does home improvement projects.

“To me, real estate development is much more rewarding. You have much more input,” he said. “You watch this whole thing from conceptual phase to building to selling.” 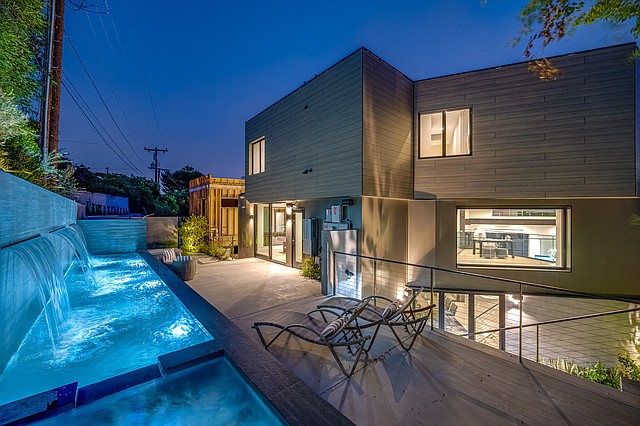 At any one time, Levine said, he is working on three or four projects.

Unlike with luxury spec homes, Levine said he prices his projects to sell for the price he actually thinks they will fetch in the market.

Nartey said medium-priced homes are still experiencing bidding wars and are selling quickly. In one week alone, he had four properties in escrow, three that were listed that week in the $900,000 to $1.5 million range.

He said listings slowed in April, adding that there are 20% to 30% fewer properties on the market compared to the same time last year.

“That’s also impacting the demand and the multiple offers that we are seeing,” Nartey added.

“We’re not cutting down at all. I think this is going to come and go,” he said. “This year is definitely going to be tough, and I think it will be cleanup time until about mid next year, but it’s going to come back. This is not going to stay here forever.”

For Gillen, Covid hasn’t changed his design, but has changed some of what he adds to the properties. For example, he said, he has added things like long-term storage and extra refrigerators.

He has 10 active projects and has seen a lot of interest.

Gillen said he is busy with developments for the next five years.

“We would love to slow down, but that’s not an option. We’re in the thick of it right now,” he said.

According to Gillen, he would even consider ramping up if he could find the right opportunities: great locations where he could build south-facing homes that capture sun and are set back from the street for privacy. Malibu’s long permitting process, he said, also slows how fast he can build.

Gillen is also interested in developing spec homes in the Hidden Hills area.

And as an agent, he has seen buyers coming from other, denser cities like New York looking for a home in L.A.

“The feeling from buyers coming here from elsewhere is the California air and lifestyle is healthier,” he said.

Levine is also working on more developments but said he was watching the economy and how his project at 1767 Sunset Ave. sells when making decisions.

“It’s not exactly wait and see, but it’s more cautiously looking at how this goes. This is a very big, large custom home, and I want to see how the sales go and how the return on investment is,” he said.

“With interest rates this low, that’s a big selling tool. People can buy much more because of the lower interest rates,” he said. “Because there’s been such a shortage of land unless you go way out ... there’s not a lot of product. So, I think the future is bright. Covid is troubling, but I have not seen prices go down at all. If anything, I see them go up. The amount of sales is definitely less due to this virus, but there are people out there looking, and if you do a good job with your product and price it fairly, I believe it will sell.”