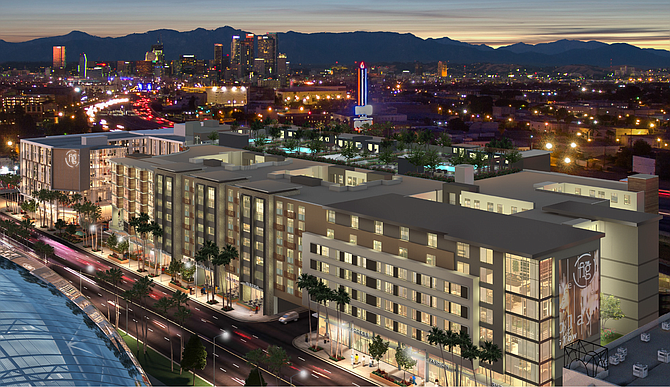 Mixed-use project Exposition Point will include a hotel.

The area surrounding USC is about to get yet another development project.

Exposition Point, a long-planned addition to Exposition Park adjacent to the school, is moving forward after clearing the city of Los Angeles’ approval process last month.

The project was formerly known as The Fig.

Irvine-based Ventus Group is developing the nearly $450 million mixed-use project, which will add a hotel, student housing and commercial ventures on a 4.4-acre site at 3900 S. Figueroa St. near the soon-to-be-renamed Banc of California Stadium and the Los Angeles Memorial Coliseum.

Construction on the project is expected to begin at the end of 2021 with a projected 2024 opening date.

It will add 252 hotel rooms; 252 housing units for students; 78 apartments; 95,000 square feet of commercial space for retail, restaurants and offices; and 745 parking spaces.

Nearly 85% of the apartment units will be designated as affordable housing.

“Exposition Point will be built just steps from world-class museums, sports arenas and an exceptional university,” said Scott Gale, president of Ventus Group. “We are proud to bring economic activity and affordable housing to an underdeveloped area that is also close to downtown, the Convention Center and public transportation.”

Prior to founding Ventus, Gale served as vice president of land acquisition for Walnut-based Shea Homes.

Ventus Group began plans for Exposition Point in 2014. The company has since acquired more than eight adjoining acres for the site, most recently adding a 30,000-square-foot shopping center there last year for $17.9 million.

The company first filed plans for the project in 2016.

It isn’t the only development planned for the area.

The Lucas Museum of Narrative Art is under construction nearby. The $1 billion museum is expected to create 1,400 jobs.

Exposition Park is a 152-acre park near USC’s campus.

A master plan has been proposed for the area, including pedestrian and bike paths, new promenades, and moving parking underground to create 14.2 acres of new green space and a children’s play area.