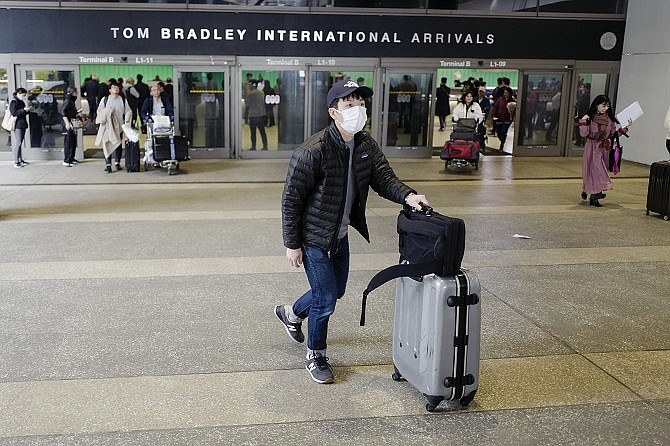 American and Delta have slashed flights to and from China at LAX as the coronavirus spreads. Photo by Ringo Chiu.

As a central gateway between China and the United States, experts say Los Angeles stands to feel an outsized economic impact from the Wuhan coronavirus, the worst disease outbreak in Asia in nearly two decades.

The disease, named for the central Chinese city where it originated, has been declared a global health emergency by the World Health Organization. As of Jan. 30, the virus had killed more than 170 people and infected more than 8,200, with no sign of slowing.

American Airlines Inc. and Delta Air Lines Inc. have slashed Los Angeles flights to and from China amid plummeting demand and a warning from the State Department for U.S. citizens to avoid travel to the country.

American has canceled all of its mainland Chinese flights at Los Angeles International Airport through March 27. Delta has cut by half the number of its flights between all U.S. and Chinese cities through the end of April.

With a sharp drop in Chinese travelers expected, local tourism, hospitality and some retail businesses are poised to take a significant hit.

In 2018, the most recent year for which data is available, Chinese nationals comprised the second largest group of international visitors to Los Angeles, according to the Los Angeles Tourism and Convention Board. Chinese travelers spent nearly $1.5 billion in the city that year, the organization said.

“If this continues, I think that you are looking at a significant impact on the likes of Disneyland, Universal Studios and other theme parks,” Maharaj said. “The live show environment and the restaurant businesses are also likely going to be affected.”

Retail businesses that depend on Chinese spending, as well as those with supply chains running through China, will also likely feel the effects of the virus, according to Maharaj. He added that the disease could have an even stronger impact on smaller local businesses, which lack the scale to weather another shock.

“Having just hopefully put the worst of the trade war behind us,” Maharaj said, “this couldn’t be any worse timing.”

After nearly two years of punishing tariffs, many businesses with operations in China were breathing a sigh of relief at the “phase one” agreement signed by President Donald Trump and Chinese leader Xi Jinping on Jan. 15.

The sudden emergence of the coronavirus has, however, chilled the prospect of a rebound in local China trade, according to Stephen Cheung, president of World Trade Center Los Angeles.

“We were hoping that we would see an uptick as people saw a light at the end of the tunnel,” Cheung said. “Unfortunately, the coronavirus really dampened the hopes of recovery.”

Cheung said his organization had been anticipating a potential spike in the trade of manufactured goods as well as agricultural products through Los Angeles following the Chinese New Year.

The holiday, which is typically China’s longest annual shutdown, fell in late January this year. Chinese officials have extended this year’s holiday in a bid to keep citizens at home and stop the spread of the coronavirus.

“The hope was that everyone was going to come back from Chinese New Year, and we were going to get back to work,” Cheung said.

The World Trade Center president said his organization had also been expecting a boost in agricultural traffic through the Port of Los Angeles in the trade agreement’s wake. The deal includes a provision for China to purchase an additional $32 billion worth of U.S. farm goods over the next two years.

Cheung said the feasibility of meeting that target is now in question following the coronavirus outbreak.

“How do you fill those contracts when there is no demand because the (Chinese) residents can’t even go to the supermarket?” he said.

Education also has the potential to be impacted if the disease continues spreading at its current rate, according to Sean Jasso, a professor of economics at Pepperdine University.

“The revenues from those will obviously be lost,” he added.

Pepperdine’s Jasso said future travel restrictions by the U.S. government could impact Chinese enrollment for the 2020-2021 school year across Los Angeles County — although this would depend on a sustained spread of the virus.

“If a quarter of your student body comes from China, like it does in my program, that could be a big problem,” Jasso said.

The Wuhan coronavirus has already infected more people in a matter of weeks than the last major Asian epidemic, SARS, did in months.

That 2003 outbreak had a relatively limited economic impact on Los Angeles.

That is not likely to be the case with the current epidemic, according to Cheung of World Trade Center L.A.

He said the explosive growth in the number of Chinese travelers, their increased spending power and China’s deep integration into the global economy over the last two decades make the current situation a much greater threat to the local economy than SARS was.

“We are definitely extremely worried,” he said. “We don’t know where this is going to go.”