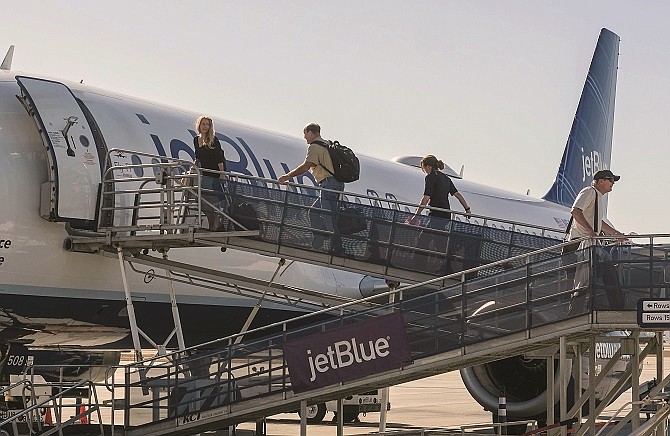 JetBlue Airways Corp. is eliminating flights from Long Beach Airport to Oakland and reducing flights out of Long Beach to Sacramento, San Jose and Las Vegas. The changes are scheduled to take effect April 29.

The Long Beach cutbacks affect six flights. They are part of a major service reorganization detailed by the airline in a Jan. 16 announcement.

At the same time, JetBlue is adding flight routes to Mexico and other U.S. destinations. To offset those additions, the New York-based airline said it is completely eliminating service at Oakland International Airport and reducing flights at Long Beach and several other airports that “are not meeting expectations.”

JetBlue’s companywide elimination of Oakland service includes the flights to and from Long Beach.

JetBlue also said it was reducing flight service from Long Beach to San Jose and Sacramento but did not specify whether those reductions would result in fewer flights or eliminate the routes entirely.

The airline did say it was reducing the number of flights from Long Beach to Las Vegas to twice daily from the current three times per day.

This is the latest round of flight reductions JetBlue has implemented at Long Beach. The cutbacks were in response to the city of Long Beach, in late 2017, rejecting the establishment of international customs facilities at the airport, which JetBlue had backed.

JetBlue had hoped to use the international service to launch flights to Mexico and turn the airport into its West Coast hub.